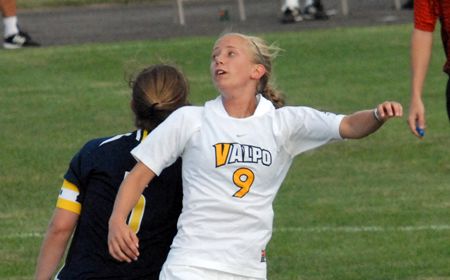 Valparaiso opened Horizon League play on Sunday afternoon in Dayton, Ohio, but was unable to come away with a victory, falling to Wright State 3-0 at Alumni Field.

“When you are in an environment that is competitive, small things add up to big things,” head coach John Marovich said.  “Today we let small things that happened to us result in a goal after playing a solid first half. In the game of soccer if you give up a goal early you start to chase the game. As the game goes on you press, which opens yourself up to be countered.”

The Raiders jumped on top 15 minutes into the match as Bekah Bonney took advantage of a Valpo misplay and scored from 10 yards out.

Wright State (3-4-2, 2-0 Horizon) added to the lead with just over 30 minutes remaining in the match.  Brittany Persaud sent a corner kick to the far post and found Lori Anderson’s head for the second goal of the afternoon.  The Raiders added the final tally less than three minutes later when Jen Agueci stole a Crusader pass and scored from 25 yards out.

“We had a good first half,” Marovich said.  “In a good conference chasing the game is a difficult thing to do. We have to do a better job of getting on the game early. It’s the little things that make the difference.”

Valparaiso (3-6, 0-1) will return home to Eastgate Field on Friday afternoon as the Crusaders host conference foe Green Bay.  Kickoff is set for 4 p.m. with all of the action carried live on WVUR (95.1-FM, Valparaiso) and online at www.valpoathletics.com.

Match Notes: Wright State leads the all-time series 7-0 … the Crusaders are 0-3 all-time in Horizon League openers … Catherine Terrell (Brighton, Mich./Brighton H.S.) led Valpo with three shot attempts, all on goal, after entering the match with three shots in the previous eight matches … Cabral has now played  28 consecutive matches in goal for the Crusaders.