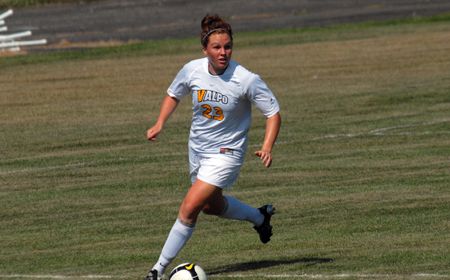 Mele Cabral (Boulder, Colo./Fairview H.S.) notched her third shutout of the season on Friday afternoon and Valparaiso’s offense tallied two second half goals as the Crusaders earned their first Horizon League victory of the season, 2-0, at Eastgate Field.

Cabral needed to make just two stops on the afternoon on her way to her 15th clean sheet of her career.

“I thought we played a full 90 minutes tonight and kept consistent with our pressure,” head coach John Marovich said after the match.  “It was a solid attacking performance.”

After both teams played a scoreless first half, Valpo found the scoreboard with 23:35 remaining in the contest.  Janine Lytle (Wooster, Ohio/Wooster H.S.) took the ball deep in the right corner and sent a cross into the box that Rachel Hoaglin (Lakeville, Minn./Academy of Holy Angels H.S.) collected and beat goalkeeper Maddie Drusch on a shot from five yards out to make it 1-0 Crusaders.

Twenty minutes later the Crusaders added an insurance goal when Drusch was trying to clear a ball at the top of the box, but Luisa Desario (Bartlett, Ill./Bartlett H.S.) stepped in front, and had the ball deflect off of her and past Drusch into the back of the net.

Valpo controlled the pressure throughout the second half, outshooting the Phoenix 9-4 in the stanza, with six of the shot being on net.  The Brown and Gold also earned all nine of their corner kick opportunities during the final 45 minutes.

“This was a big three points for us,” Marovich added.  “Now we have to put it behind us and hit the road for another one on Sunday.”

Match Notes: Green Bay leads the all-time series 8-2-1, but Valpo is 2-0-1 in the last three meetings against the Phoenix … Lytle’s assist was the first point of her career … freshman Hoaglin and Desario are tied for the team lead with three goals each … rookies have accounted for seven of Valpo’s nine goals this year.