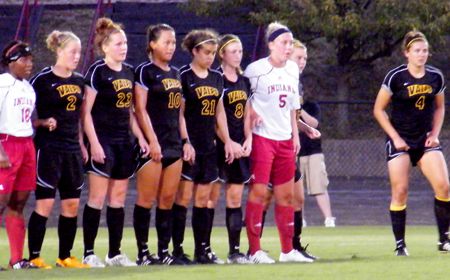 A goal with just over 20 minutes to play in regulation was the difference on Sunday evening as Valparaiso dropped a 1-0 Horizon League match to Loyola at Loyola Soccer Park in Chicago, Ill.

“This was a tough result for us on the road tonight, but I though we came in and battled for 90 minutes,” head coach John Marovich said after the match.  “It came down to one play.”

The Ramblers broke through at the 69:08 mark as Lauren Papierski sent a cross from nearly 40 yards out which was deflected by goalkeeper Mele Cabral (Boulder, Colo./Fairview H.S.), and knocked in by Nikki Staton for her first goal of the season.

The Crusaders and Ramblers were nearly even in shot attempts, with Loyola (2-9-1, 1-2-1 Horizon) holding a slim 8-7 edge for the match.  Valpo had three corners compared with one for the hosts, and forced Rambler netminder Katie Groesch to make a pair of saves on the day.  Cabral made four stops for the Crusaders.

“I thought we were very good in the air today and handled the pressure they put on us,” Marovich added.  “It is just a matter of creating opportunities in the final third.”

Valparaiso (4-7, 1-2) will return to Eastgate Field next Sunday afternoon to begin a three-match homestand hosting Milwaukee.  Kickoff is set for 1 p.m. with all the action carried live on WVUR (95.1-FM, Valparaiso) and online at www.valpoathletics.com.

Match Notes: Valpo has met Loyola each of the 17 seasons the Crusaders have had a women’s soccer program … the Ramblers lead the all-time series 13-4 … Cabral played her 37th career match in goal, tying Jill Kolarczyk (1993-1994) and Kristen Templin (2000-2003) for fourth on Valpo’s all-time matches played list in goal.