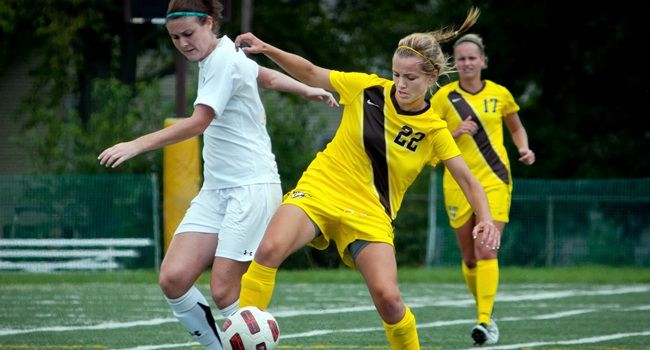 This Week in Crusader Soccer: The Valparaiso women’s soccer team looks to continue its strong start to the 2012 campaign this weekend with a pair of matches. Valpo opens the weekend at home against Kent State on Friday evening before making the short trip to Chicago to take on DePaul Sunday afternoon.

Previously: A pair of home matches last weekend ended in similar fashion for Valpo, as the Crusaders dominated both contests in 1-0 wins over IUPUI (Friday) and Towson (Sunday). Luisa Desario scored the decisive goal in the opener against the Jaguars, while Trisha Wladecki converted a PK for the lone goal in the win over the Tigers. Kristen Manski earned shutouts in both matches.

Following the Crusaders: WVUR (95.1 FM, Valparaiso) will begin its 2012-2013 broadcast schedule this weekend, broadcasting the Kent State match live over its airwaves. The audio will also be available through www.valpoathletics.com, which also holds links for live stats for both matches.

Head Coach John Marovich: John Marovich holds a 36-29-14 record both overall and with Valpo in his fifth season at the helm of the Brown and Gold. Just the third head coach in program history, Marovich has the best winning percentage (.544) ever at Valpo, and ranks second in total victories.

Series Notes: Kent State - Valpo has faced the Golden Flashes just once on the pitch, with KSU earning a 2-0 victory in Kent on Oct. 31, 2003. Kristen Templin made 11 saves in goal for the Crusaders in that contest.
DePaul - The matchup with the Blue Demons revives a series which has been dormant since 2002, with DePaul holding a 4-2-0 edge in six all-time meetings. The Crusaders dropped the last meeting in Valpo on Oct. 25, 2002, 3-1, despite a penalty kick goal from Emily King.

Scouting the Opposition: Kent State - The Golden Flashes also enter Friday’s showdown at a perfect 2-0-0 this year with wins at Cleveland State (2-0) and over Morehead State (4-1) last weekend. Five different KSU players combined for its six goals, with Jessacca Gironda tallying twice. Stephanie Senn has faced just four shots in allowing just one goal through two games.
DePaul - The Blue Demons also defeated Towson last weekend, earning a 2-1 win, but fell to Loyola on Sunday by a 1-0 count. Ashleigh Goddard and Natasa Radosavljevic each earned a goal and an assist in the win over the Tigers.

A Quick Start: The back-to-back wins to open the regular season over IUPUI and Towson got the Crusaders off to a perfect 2-0-0 start for just the second time in program history. The 2010 squad also won each of its first two matches en route to going undefeated in its first four games (3-0-1).

Desario Continues to Score: Senior Luisa Desario notched the match’s lone goal in the 1-0 win over IUPUI on Friday, scoring in the 59th minute. For Desario, it continued her march up a number of Valpo’s all-time charts, as she is now tied for fifth in both career goals (15) and match-winning goals (6), and sits alone in fifth place in career points (37).

Wladecki Takes Advantage: Fellow senior Trisha Wladecki was chosen to take the penalty kick when the Crusaders were awarded a penalty late in Sunday’s game against Towson, and calmly converted on her first career effort from the spot for the match-winning goal. For Wladecki, it was her third career goal (first since Aug. 21, 2010) and her first career match-winner. All three of the senior’s goals have come in the opening weekend of the season.

Manski Posts Clean Sheets: Junior goalkeeper Kristen Manski took care of business between the pipes last weekend, making a pair of saves against both IUPUI and Towson to keep the Crusader opponents off the scoreboard. For Manski, the shutouts were the 13th and 14th of her career. She also became the first goalkeeper in Valpo history to post shutouts in each of the first two matches of the season.

Making Their Debut: Over the course of the weekend, five different Valpo freshmen took to the park for the first time in the Crusader kit. Rita Craven and Jordyn Ryfiak both earned spots in the starting XI against IUPUI on Friday, while Sarrah Ludwig and Jenny Fassbinder came off the bench to debut against the Jaguars. All four played on Sunday against Towson as well, along with the debut of Shelby Oelschlager in the back for the last 40 minutes of the game.

Shots Shots Shots Shots: The Crusaders’ dominance in both contests over the opening weekend can be seen in their advantage in the shots category. Valpo out-shot IUPUI on Friday 26-5 (10-2 on goal), the team’s highest total of shots in a single game since tallying 27 against Youngstown State on Oct. 24, 2010. Then against Towson on Sunday, the Crusaders owned a 14-4 advantage in the category and put six on frame to the Tigers’ two.