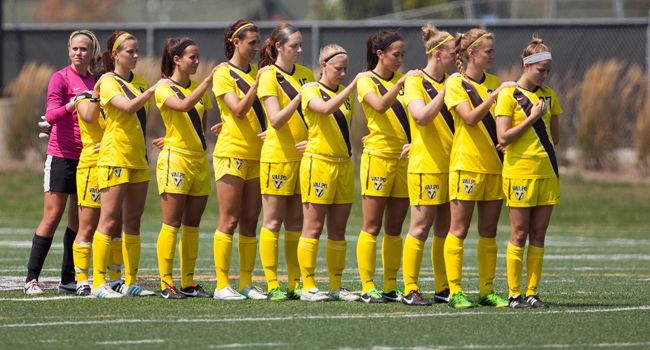 This Week in Crusader Soccer: Following an opening weekend split, the Valparaiso women’s soccer team plays two more matches this weekend. The Crusaders will close a three-game homestand by taking on Grand Canyon Friday evening before hitting the road for the first time to face Kent State Sunday afternoon.

Previously: The Crusaders split a pair of 1-nil decisions over the first weekend of action. Rita Craven found the back of the net in the 32nd minute Friday night in the season opener in a 1-0 win over DePaul, but on Sunday, Valpo fell victim to an 87th minute penalty kick in a 1-0 loss to Miami (Ohio).

Following the Crusaders: Both matches this weekend will have live stats available through ValpoAthletics.com. Over the course of the 2013 season, six matches will have free live video on the Horizon League Network, including three matches at home, while WVUR, Valpo’s student radio station, will also be broadcasting select matches.

Head Coach John Marovich: John Marovich holds a 45-36-17 record both overall and with Valpo entering his sixth season at the helm of the Brown and Gold. Just the third head coach in program history, Marovich has the best winning percentage (.546) ever at Valpo, and ranks second in total victories.

Series Notes: Grand Canyon - Valpo has never faced the Antelopes, newcomers to Division I this season, on the soccer field. The Crusaders have just one all-time meeting against a current WAC school - a 3-2 victory at UMKC to open the 2010 campaign.
Kent State - The Crusaders and Golden Flashes have met twice in program history, with Kent State holding a 1-0-1 edge in the series. The squads met last season in Valpo on August 24, with the game ending in a 1-1 draw thanks to an 85th minute goal by Sarrah Ludwig.

Scouting the Opposition: Grand Canyon - The Antelopes dropped their season opener on Friday at Saint Mary’s (Calif.) by a 3-0 final. Grand Canyon moves up to Division I this year after competing in Division II last year, where it went 9-7-2. The Antelopes return their leading goal scorers in Gabriella Zavala de Rojas and Samantha Bush, each of whom scored five goals in 2012.
Kent State - The Golden Flashes split a pair of matches on the opening weekend, downing St. Bonaventure 3-2 before falling 3-0 to Marshall. Freshman Jenna Hellstrom netted twice in the victory over the Bonnies, including the match-winner in the 76th minute.

One-Nil: Valpo posted a pair of 1-0 results in the first weekend of regular season action, which was anything but a new sight for fans who had watched the Crusaders in 2012. Of Valpo’s 19 matches last season, over half of them resulted in 1-0 final scores, with the Crusaders going 6-5-0 in those contests.

Maintaining Strong Defense: With three of the regular back four, along with the starting goalkeeper, back from the 2012 team which led the nation in goals against average, you could expect the Crusaders’ defense to be a strength early on in 2013, and it proved to be on opening weekend. Valpo surrendered no goals in the run of play on 21 shot attempts, including 11 on goal - the only goal Kristen Manski and the Crusaders gave up was on a penalty kick against Miami.

Craven Finds the Net: Sophomore Rita Craven scored just once as a freshman in 2012, netting the match-winner against IPFW, but matched that output in the Crusaders’ first match of the year. Craven, an All-Newcomer selection by the Horizon League last year, scored in the 32nd minute against DePaul in the season opener, a tally which would stand up for the match-winner in the 1-0 victory.

Rookie Makes a Mark: Freshman April Cronin put in a pass from the right wing to Craven for the Crusaders’ goal against DePaul, giving the rookie an assist in her first collegiate match. It was the first time a freshman has contributed to a goal in a Valpo season opener since Trisha Wladecki scored a goal against Morehead State in the 2009 opener.

So Many New Faces: Head coach John Marovich has so many new players on the 2013 squad that he could theoretically comprise a starting XI of all newcomers. 12 newcomers in all join the 15 returnees from last season’s squad, with 11 of them being true freshmen as well as one transfer.