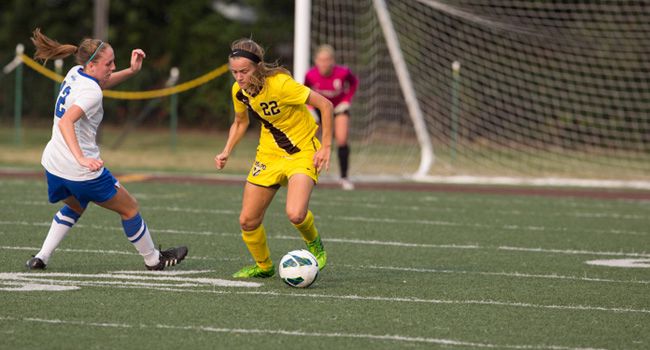 This Week in Crusader Soccer: For the first time this season, the Crusader women’s soccer team will play back-to-back road games this weekend, traveling to IUPUI for a Friday evening contest before heading to Evansville for a Sunday afternoon game.

Previously: First-half goals stood up for the Crusaders in a pair of 1-0 victories last week. Kat Anesini scored in the 33rd minute against Northwestern as Valpo closed out its first-ever win over a Big Ten opponent. Then, on Sunday, Hailey Chmela scored in the 20th minute of the Crusaders’ one-nil win over IPFW.

Following the Crusaders: Both matches this weekend will have live stats available through ValpoAthletics.com, while live video (for a fee) will be available for both games through the home team’s website. Six Valpo women’s soccer matches this year will have free live video on the Horizon League Network. Over the course of the 2013 season, WVUR, Valpo’s student radio station, will also be broadcasting select matches.

Head Coach John Marovich: John Marovich holds a 48-37-17 record both overall and with Valpo entering his sixth season at the helm of the Brown and Gold. Just the third head coach in program history, Marovich has the best winning percentage (.554) ever at Valpo, and ranks second in total victories.

Series Notes: IUPUI - Valpo owns a stellar 10-3-2 mark in the all-time series against the Jaguars, and is 7-0-1 in the last eight meetings. Last year, the Crusaders earned a 1-0 victory at home on August 17, courtesy of a 59th minute goal from Luisa Desario.
Evansville - Valpo is just 2-7-1 all-time against Evansville, but holds a 2-1-1 edge in the last four meetings. Two seasons ago, the two sides met in Valpo on August 28 in a game which saw the Purple Aces score with just 77 seconds to play to take the 1-0 win.

Scouting the Opposition: IUPUI - The Jaguars enter Friday’s match at 3-2-1 on the season, including an undefeated 3-0-1 mark at home. IUPUI has scored just six goals in six games, led by two tallies from Taylor Heidorn, but also has surrendered just five goals.
Evansville - The Purple Aces own a 3-2-1 mark on the season as well , including two wins in their three home games. Stephanie Thompson has three of Evansville’s seven goals this year, while Emily Griebel owns a pair as well. Simone Busby has given up just four goals and boasts a 0.64 GAA this year.

A B1G Win: The Crusaders’ win over Northwestern Thursday night was a historic one, as it was Valpo’s first victory over a Big Ten opponent. In fact, it was the Crusaders’ first result ever against a Big Ten team, as they had entered the game 0-32-0 against teams in the Big Ten.

Another Landmark Win: The win over the Wildcats was the second landmark victory for Valpo this season. The Crusaders downed DePaul in the season opener for their first-ever win as a program against a team from a power conference (Big East).

One-Nil: It’s beginning to feel like Groundhog Day whenever the Crusaders take the pitch in 2013. Through six games this season, all six have ended with 1-0 results, something that is not a new sight for fans who watched the Crusaders in 2012. Of Valpo’s 19 matches last season, over half of them resulted in 1-0 final scores, with the Crusaders going 6-5-0 in those contests.

Manski Honored by League: Senior goalkeeper Kristen Manski earned her first career Defensive Player of the Week from the Horizon League office this week after tallying a pair of shutouts last week. Manski blanked both Northwestern and IPFW, and now owns 26 career clean sheets, a Valpo record and third-most in league history. This season, she has given up just two goals in six games, and leads all league keepers in both goals against average (0.32) and save percentage (.929). In fact, dating back to last year, Manski has a run of 19 consecutive matches where she has given up one goal or fewer.

Balance Offensively: Valpo has scored just four goals so far this season, but the four goals have come courtesy of four different players, as Kat Anesini opened her account with the match-winner against Northwestern last Thursday and Hailey Chmela found the back of the net on Sunday. Each goal has had exactly one assist as well, with four different players combining for the assists. Only Chmela and Jordyn Ryfiak have been in on multiple goals.

Maintaining Strong Defense: With three of the regular back four, along with the starting goalkeeper, back from the 2012 team which led the nation in goals against average, you could expect the Crusaders’ defense to be a strength early on in 2013, and it has proved to be so far. Through the first six games of the year, Valpo has surrendered just two goals, including just one in the run of play.