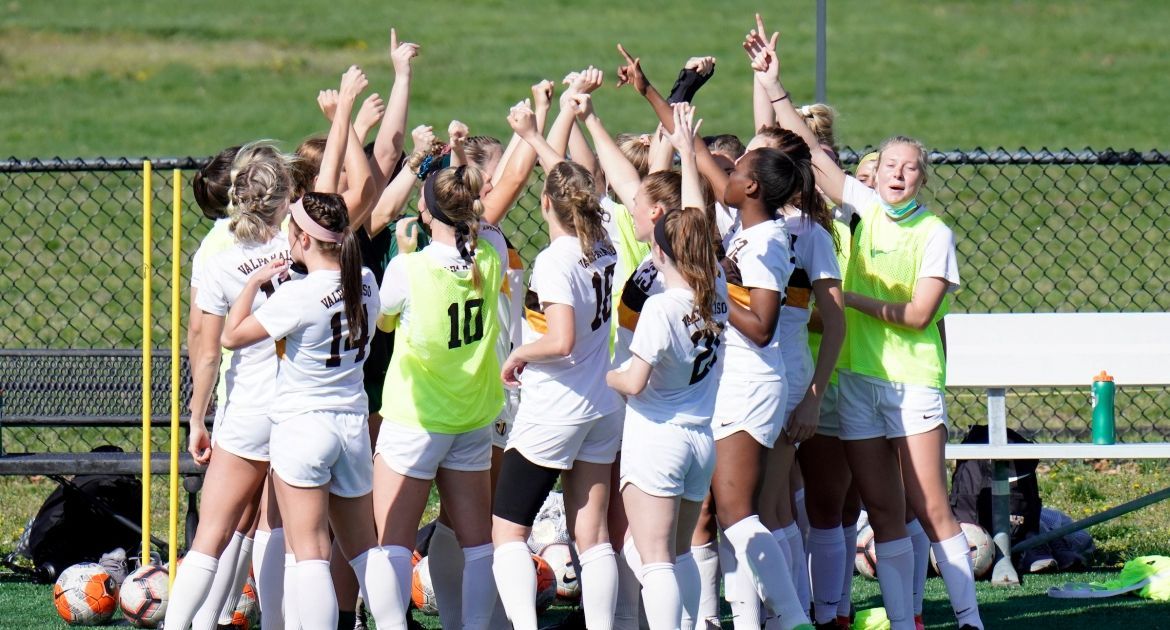 Next Up in Valpo Soccer: One match is all that separates Valpo from its first conference championship and NCAA Tournament berth since 2014, as the third-seeded Brown and Gold face off against top-seeded Loyola Sunday afternoon in the title match of the MVC Championship.

Previously: Freshman Lindsey Dusatko found the back of the net in Wednesday’s MVC semifinal match at Indiana State with just over a minute left in extra time to give Valpo the 1-0 victory on the golden goal. The thriller saw Valpo goalkeeper Nikki Coryell make five saves as the defense posted its third consecutive clean sheet.

Next Up: The winner of Sunday’s championship match earns the MVC’s automatic bid to the NCAA Tournament. The tournament field will be unveiled on Monday.

Following the Brown and Gold: The tournament championship will be broadcast live on ESPN+, with Tom Ackerman and David Dir on the call. WVUR (95.1 FM, Valparaiso) will carry a radio broadcast well. Links for the live coverage will be available via ValpoAthletics.com.

Head Coach John Marovich: In his 13th season at the helm of the Brown and Gold, John Marovich holds a 103-98-36 (.511) record both overall and at Valpo as a head coach. The 2014 Horizon League Coach of the Year, Marovich holds Valpo’s all-time records for both victories and winning percentage.

Series Notes: The most common opponent in program history, Valpo and Loyola will be matching up for the 30th time Sunday. The Ramblers hold an 19-9-1 advantage in the all-time series and have won the last four matches since Valpo won 2-1 in October 2017 in their first meeting as MVC opponents, including a 1-0 victory at Brown Field earlier this season. The two sides have met twice in postseason action previously: the first round of the 2012 Horizon League Tournament (1-0 Loyola win) and the first round of the 2017 MVC Championship (2-1 Loyola win).

Scouting the Opposition: Loyola enters the championship match at 7-1-1 overall this season, and earned the top seed in the tournament after going 6-1-1 in conference play. Lindsey Hardiman scored the golden goal in the 103rd minute of the Ramblers’ semifinal versus Illinois State to give them a 2-1 win and advance them to the title match. Hardiman has scored a team-high five goals this year, while 2021 MVC Player of the Year Megan Nemec has a team-best 14 points on three goals and eight assists.

The Goldenest of Goals: Lindsey Dusatko’s golden goal in the 109th minute Wednesday at Indiana State was noteworthy for a number of reasons, beyond the obvious of it sending Valpo into the title match. It marked the first time in program history Valpo has scored a golden goal in a postseason match (previously 0-3-3 in the postseason when a match has gone to extra time). It also marked the first time Valpo scored a golden goal in any match since a 3-2 win over Eastern Illinois in September 2017 (0-3-9 since that match in overtime fixtures before Wednesday). Dusatko now owns the latest golden goal by a Valpo player in program history, surpassing Jackie Thomas’ match-winner against Oral Roberts in September 2006 by 31 seconds.

Maintaining the Shutout Streak: The Valpo defense withstood an Indiana State attack which generated 23 shots in Wednesday’s win, limiting the Sycamores to just five shots on goal in posting its third consecutive clean sheet. This is the first time the Brown and Gold have recorded three straight shutouts since the 2014 team racked up four consectuive clean sheets early in the campaign. Valpo’s shutout streak currently stands at 312 straight minutes, dating back to Missouri State’s second-half goal on April 3 - that is the program’s longest streak since 2014 as well. That 2014 team was also the only other side in program history to post two shutouts in postseason play.

A Historic Haul: It was a historic haul of postseason awards for the Valpo soccer program as the MVC announced its awards on Friday. Nikki Coryell became the first goalie in program history to earn a league’s Goalkeeper of the Year accolade and is the first freshman to earn MVC Goalkeeper of the Year honors since 2012. Meanwhile, Valpo’s three honorees on the First Team not only tied for the conference high, it surpassed the program’s total number of two First Team All-MVC recipients entering this season in six years as a league member (1996-98 as an affiliate member; 2017-19 as a full member) and was the most First Team All-Conference honorees in a single season since the 2006 side placed three players onto the First Team All Mid-Continent Conference squad.

Goalkeeper of the Year: Coryell has been stellar all season long backstopping the Valpo defense between the goalposts and earned Valpo’s first major award since joining the Valley, while also earning spots on the All-MVC First Team and All-Freshman Team. A two-time MVC Defensive Player of the Week selection, Coryell surrendered just four goals in eight MVC fixtures and allowed one goal or fewer in all eight regular season conference contests. She has been just as strong as ever since the start of the MVC Championship, posting a pair of clean sheets to lower her season GAA to 0.49 and her save percentage to .885. She ranks ninth in the nation with seven shutouts, 18th in save percentage and 27th in GAA. Coryell already owns Valpo’s freshman record with her seven clean sheets, a mark which is tied for sixth in a single season in program history, and is within range of the program’s single-season GAA (0.43) and save percentage (.885) records.

Maris Goes the Distance: Senior defender Keegan Maris earned First Team All-Conference recognition for her role in Valpo’s robust defensive effort this season. After not playing a competitive match in over two and a half years due to injury, Maris has returned this year and has played every minute of every match at left back for the Brown and Gold. During the regular season, that amounted to 1,070 minutes over 11 matches, in which the Valpo defense surrendered just seven goals and recorded five shutouts. Maris has then played all 219 minutes at right back in Valpo’s pair of clean sheets in the MVC Championship. Maris also contributed on the offensive end with an assist on Valpo’s opening goal in its win over Missouri State late in the regular season schedule, a victory which secured a key three points.

Dugan Earns First-Team Spot: Sophomore forward Kiley Dugan received First Team All-MVC honors for her work up front for the Brown and Gold this spring. Dugan has been a stalwart on the attack for Valpo this year, playing 1,096 of 1,289 possible minutes through the MVC semifinals — by far the most of any Valpo attacker. She has played 80 or more minutes nine times in Valpo’s 13 matches. Dugan notched a key goal for the Brown and Gold in the 67th minute against Drake to equalize the match against the Bulldogs less than four minutes after Drake had taken the lead in an eventual draw. This marks the second straight year Dugan has earned postseason recognition from the Valley, as she was an All-Freshman Team choice last season.

Standout Rookie: Freshman forward Kelsie James picked up spots on the Honorable Mention All-MVC and All-Freshman squads thanks to recording a team-high eight points (3G, 2A) this year. The rookie, who was a three-time MVC Freshman of the Week selection this season, notched goals in non-conference play against Chicago State and DePaul, and then was involved with all three of Valpo’s match-winning goals in MVC action. James scored the match-winner in Valpo’s key victory in the penultimate match of the regular season against Missouri State, while assisting on the game-winners against Indiana State and Illinois State — the latter clinching the three seed in the MVC Championship for Valpo.

Consistency in the Back: Contributing to Valpo’s strong defensive numbers this season is the fact that head coach John Marovich has been able to trot out the same back four nearly the entire season. Senior Keegan Maris and sophomore Nicole Norfolk have started all 13 matches this year, junior Peyton Flynn has started each of the last 12 and junior Katie Hansen has been in the lineup each of the last 11 fixtures. Notably, none of the four have come off the field at all since the start of MVC play.

Playing Every Minute: Maris and Norfolk have taken that one step further, as both - along with Coryell in goal - have played all 1,289 minutes of action this year. For Maris, that is especially impressive given she entered this season having not played a competitive match in over 2 1/2 years due to injury. Meanwhile, for Norfolk, she has played every minute of her Valpo career, combining for 2,948 minutes played over 31 matches to date. That is the second-longest known streak of consecutive minutes played by a Valpo defender, as Tracy Roos (2008-11) played 3,413 consecutive minutes spanning parts of her final three seasons. However, Roos did not play every minute of multiple seasons, something Norfolk is on track to accomplish.

Notching Match-Winners: Five different players have picked up match-winning goals in Valpo’s five victories this year. Senior Tahelah Noel knocked home a 32nd-minute penalty in the 2-1 win over Chicago State, senior Lauren Torhorst scored in the 41st minute of Valpo’s 2-0 regular season victory against Indiana State, James found the net in the 60th minute in the 2-1 win over Missouri State, sophomore Natalie Graf scored the lone goal in the regular season finale at Illinois State in the 54th minute, and most recently Dusatko notched the golden goal in the MVC semifinal at Indiana State.

Reaching a Milestone: The regular season win over Indiana State was a milestone victory for head coach John Marovich, who earned his 100th win as head coach of the Brown and Gold with the victory over the Sycamores. He became the first Valpo soccer coach - men’s or women’s - in history to reach triple digits in victories on the sidelines. Marovich now owns a career record of 103-98-35 in his 13th season at the helm of the Valpo program, and he was a pair of 52 wins over six seasons as an assistant/associate head coach as well before becoming head coach. Marovich is one of three MVC coaches with 100 or more wins as head coach at their current school (Lindsey Horner, Drake; Rob Brewer-MSU).

The Youth of the Side: Over one-third of Valpo’s minutes played this year have come from freshmen, and six rookies have combined to make 42 starts so far this year. Underclassmen account for just shy of 60 percent of the minutes played this season and have earned 79 of 143 starting nods. Of the 14 players who have seen 500 minutes or more of action, five are freshmen and four are sophomores.