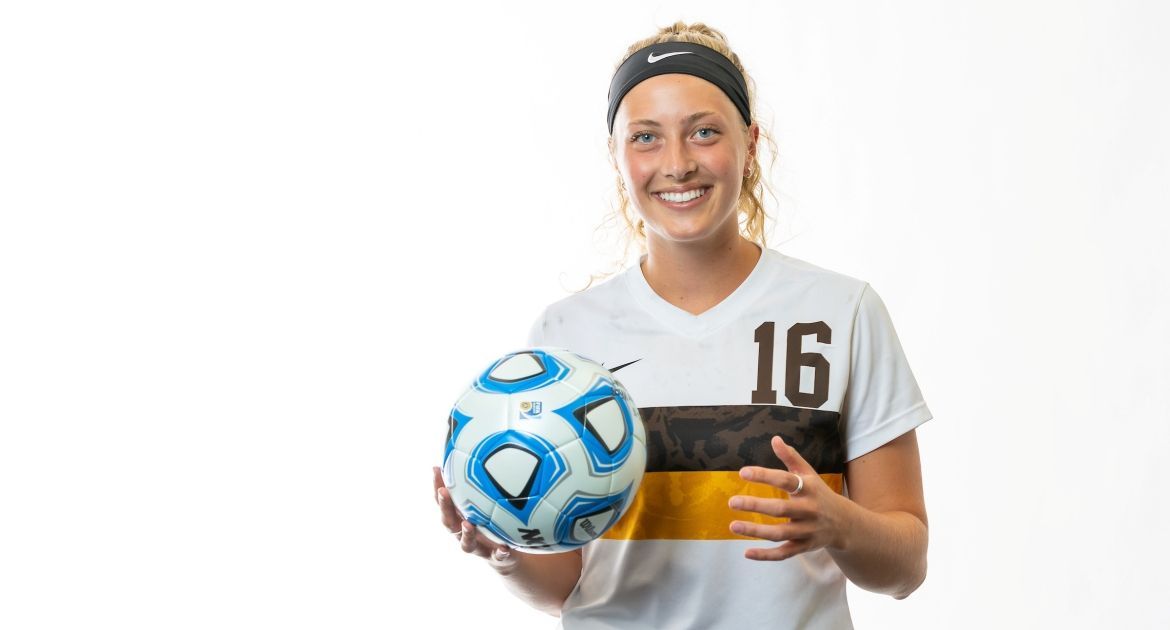 Next Up in Valpo Soccer: The second weekend of regular season action features Valpo’s lone multi-match road trip of the 2021 campaign, as the Beacons head to western Pennsylvania to take on Duquesne Friday evening and Robert Morris Sunday afternoon.

Previously: Valpo opened the regular season last weekend, acquitting itself well in a 1-0 loss at Indiana before falling to Ball State in its home opener, 3-1.

Head Coach John Marovich: In his 14th season at the helm of the Valpo program, John Marovich holds a 103-101-36 (.504) record both overall and at Valpo as a head coach. The 2014 Horizon League Coach of the Year, Marovich holds Valpo’s all-time records for both victories and winning percentage.

Series Notes: The matchup with Duquesne will be the first in program history, while Valpo and RMU have met just once before - a 4-2 Valpo victory on Brown Field in 2018. That match was a memorable Senior Day for Cory Griffith, who set a program single-match record by scoring all four goals in the win.

Scouting the Opposition: Duquesne - The Dukes won their season opener on Sunday over Saint Francis (Pa.) by a 3-1 final in their lone match before Friday’s contest. Duquesne was picked to finish 10th of 14 teams in the Atlantic 10 preseason poll after posting a 3-5-1 record last spring.

Robert Morris - The Colonials enter the weekend at 1-1-0, having fallen 3-1 at UMBC before responding with a 2-1 win at Mount St. Mary’s. RMU will play at St. Bonaventure Thursday evening before Sunday’s matchup with the Beacons. RMU was picked to finish in 12th place in the Horizon League preseason poll after posting a 1-8-0 record last spring.

Debuts on Opening Weekend: There were two brand-new faces in the starting lineup for Valpo in both matches of the opening weekend of action. Xavier transfer Allie Anderson started and played all 90 minutes in each of her first two matches in the Brown and Gold, while freshman Abby White earned the starting assignment in her first two collegiate matches. Anderson and White were two of seven newcomers for the Beacons to see action in the opening weekend of play: Loyola transfer Abbey Hillman and freshmen Peyton Evans, Sam Gountounas and Addy Joiner each made appearances off the bench in both fixtures, while freshman Dana Fish debuted late in the match against Ball State.

No Changes in the Lineup: Head coach John Marovich ran out the same starting XI in each of the season’s first two matches. Included among the eleven in the lineup were three players who started every match last season: goalkeeper Nikki Coryell has made 16 straight starts since joining the program last year, while juniors Kiley Dugan and Nicole Norfolk have now each started 34 consecutive matches since stepping on campus.

A Rare Multi-Match Trip: This weekend will mark the only time this season that Valpo plays consecutive matches away from home. The Beacons’ other six road matches are all broken up by at least one home match in between. Notably, of the five remaining road matches after this weekend, two of those contests will be quick trips to Chicago and Bridgeview.

James Fills Up the Net: Sophomore forward Kelsie James got off the mark for Valpo with her goal early in Sunday’s match against Ball State. That tally was a continuation from a strong spring season for James, who was an Honorable Mention All-MVC selection and member of the MVC’s All-Freshman Team last season as a rookie. The three-time MVC Freshman of the Week tied for team-high honors with three goals and led Valpo with two assists and eight points. James finished the campaign tied for third in the Valley in both goals and assists.

Dugan Works Up Front: Junior forward Kiley Dugan brought home First Team All-MVC and Third Team All-Region honors last year for her work on the attacking front for Valpo. Dugan played 1,172 minutes - 85% of the possible minutes and the most of any Valpo forward - and went 80+ minutes on nine occasions. She tallied a goal in MVC action against Drake March 19, equalizing the match in an eventual 1-1 draw less than four minutes after Valpo had fallen behind.

Iron Woman: Starting out her third season at Valpo, junior defender Nicole Norfolk has been a fixture on the field. Not only has Norfolk started all 34 matches in the Brown and Gold since stepping on campus, she has not come off the field once in any of those 34 contests. She played all 1,379 minutes of the spring 2021 campaign and is now up to 3,218 consecutive minutes played following the opening weekend of action. That is the second-longest known streak of consecutive minutes played by a Valpo defender, as Tracy Roos (2008-11) played 3,413 consecutive minutes spanning parts of her final three seasons. However, Roos did not play every minute of multiple seasons, something Norfolk did in each of her first two years.