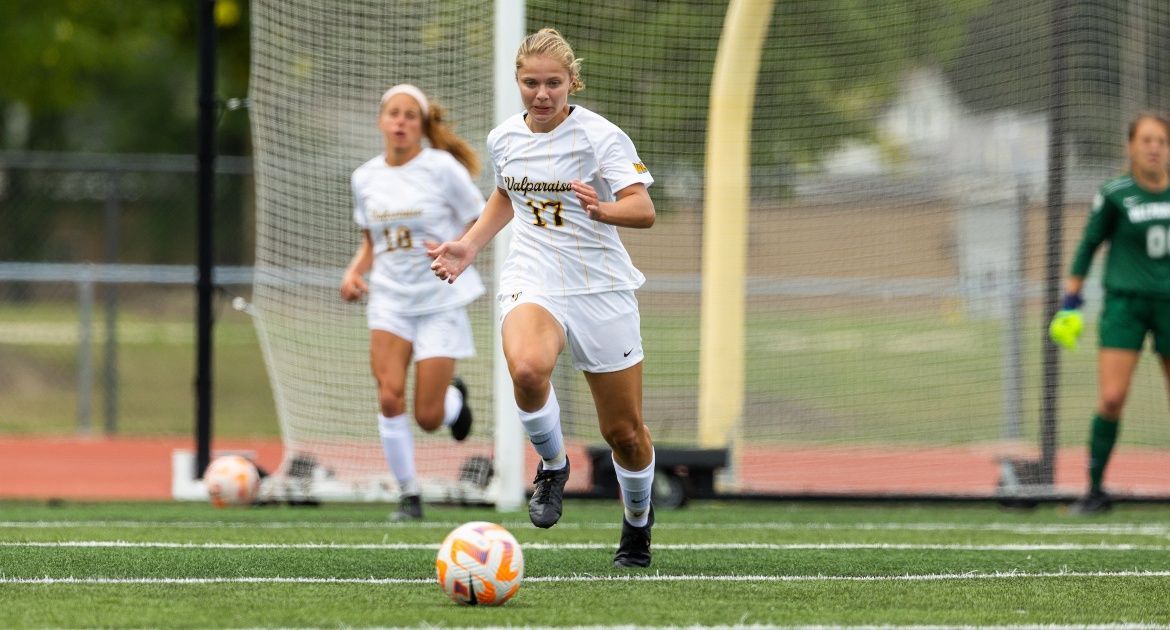 Next Up in Valpo Soccer: With an unbeaten weekend of action behind it to open the 2022 campaign, the Valpo soccer team faces a challenging weekend upcoming as it heads west to the Centennial State. The Beacons will take on Pac-12 foe Colorado on Friday evening before turning around to play at Northern Colorado on Sunday afternoon.

Previously: Valpo did not concede a goal in its first two matches of the season, opening the campaign with a scoreless draw at Eastern Illinois before coming home and taking a 1-0 win over Youngstown State behind a second-half goal from Kiley Dugan.

Head Coach John Marovich: In his 15th season at the helm of the Valpo program, John Marovich holds a 114-105-39 (.517) record both overall and at Valpo as a head coach. The 2014 Horizon League Coach of the Year, Marovich holds Valpo’s all-time records for both victories and winning percentage.

Northern Colorado - The two programs have met just once previously, a 2-1 win for the Bears in Valpo on Sept. 5, 2003. Emily King leveled the match for Valpo in the 41st minute, but Jessica Brennan scored the match-winner for UNC in the 74th minute.

Scouting the Opposition: Colorado - The Buffaloes posted an 8-7-4 record last season and have been picked to finish fifth in the Pac-12 this year. Colorado got off to a strong offensive start to the season, beating Weber State 5-0 and San Diego 5-1 on opening weekend. Shyra James was named Pac-12 Offensive Player of the Week as she scored three goals over the two victories.

Northern Colorado - Coming off a 10-8-2 record in 2021, the Bears were picked to win the Big Sky this season in the conference preseason poll. UNC enjoyed an unbeaten opening weekend of play, winning 2-0 over Wyoming and battling to a 1-1 draw with Kansas State.

New Season, Same Weekly Honors: It’s become a habit for Valpo to pick up weekly awards from the MVC over the last few seasons, and that continued after opening weekend as goalkeeper Nikki Coryell was named the MVC Defensive Player of the Week after posting a pair of clean sheets. Coryell, whose four saves included a diving effort in the final seconds to preserve the 0-0 draw at EIU, is now tied for fourth in program history with 14 career shutouts and is just one clean sheet away from becoming the 18th player in MVC history with 15 or more clean sheets.

Coryell has now been named MVC Defensive Player of the Week five times, tying her with Kelsie James (two Offensive, three Freshman) for the second-most prolific weekly award winner in program history, trailing only Lori Moore (1999-2002), who was a six-time Mid-Continent Conference Player of the Week. Valpo has had at least one MVC weekly award winner in seven of the last eight weeks of regular season play dating back to last year and has 16 weekly award recipients since the start of the spring 2021 campaign.

Dugan and James Team Up: The pair of Kiley Dugan and Kelsie James teamed up for Valpo’s match-winner Sunday against Youngstown State. Dugan finished off the move with the goal in the 74th minute ‑ her third career tally, first since March 19, 2021 and her first career match-winner. Meanwhile, James picked up the assist - the seventh of her career, five of which have come on match-winning goals.

Opening Weekend Minutiae: Valpo is unbeaten through its first two matches of the year for the fourth time in the last six seasons - all three prior years (2017, 2018, spring 2021) saw Valpo lose its third match. The Beacons posted consecutive clean sheets to open the season for the third time in program history (2012, 2017) and are in search of three straight shutouts to open the year for the first time. Valpo’s draw with Eastern Illinois was its first draw in a season opener in the 30-season history of the program and came in the first match under the new protocol for no extra time in the regular season.

The First Time: Freshman Molly O’Rear was the lone Beacon to make her debut in a Valpo uniform in the season opener at EIU, as she started and played all 90 minutes. Against YSU, sophomore Sam Gountounas made her first career start, while freshman Sarah Epstein came off the bench for her collegiate debut and transfer Andrea Garcia saw her first regular season action at Valpo.

Coming Home: A pair of Valpo players return to their home state this weekend as the Beacons visit the Centennial State. Sophomore Peyton Evans hails from Parker, while fellow sophomore Lauren Cook is a native of Littleton.

Always in the XI: Three players started all 18 matches for Valpo a season ago: Kiley Dugan, Nicole Norfolk and Abby White. All three started both matches on opening weekend as well. In their fourth season in the Valpo uniform, Dugan and Norfolk have both started all 52 matches since stepping on campus.