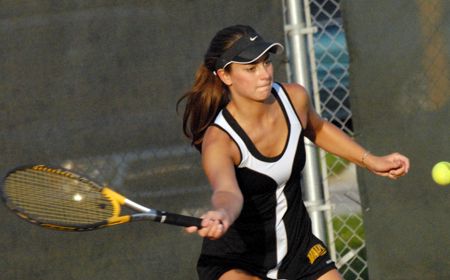 In singles, the Cardinals won all six matches in straight sets.  The closest of the contests came at sixth singles, where Wingstrom extended the second set before falling 6-2, 7-5 against Surowiec.  Schwartz had a battle at number one singles as well before dropping a 6-3, 6-3 match against Hebble.

Boulieris defeated Keifer 6-2, 6-0 at number two singles while Johnson was a 6-0, 6-1 winner against Bilyeu at the number three spot.  Hayley Hall topped York 6-0, 6-2 at fourth singles while Thomson added a 6-0, 6-0 victory over Christine Antrobus (Fort Wayne, Ind./Homestead H.S.) in the fifth slot in the lineup.

Valparaiso (0-3) will host IUPUI on Friday, February 20 for the Crusaders’ home opener to take place at Matchpoint Tennis Club in Griffith, Ind.  First serve against the Jaguars is set for 4 p.m.