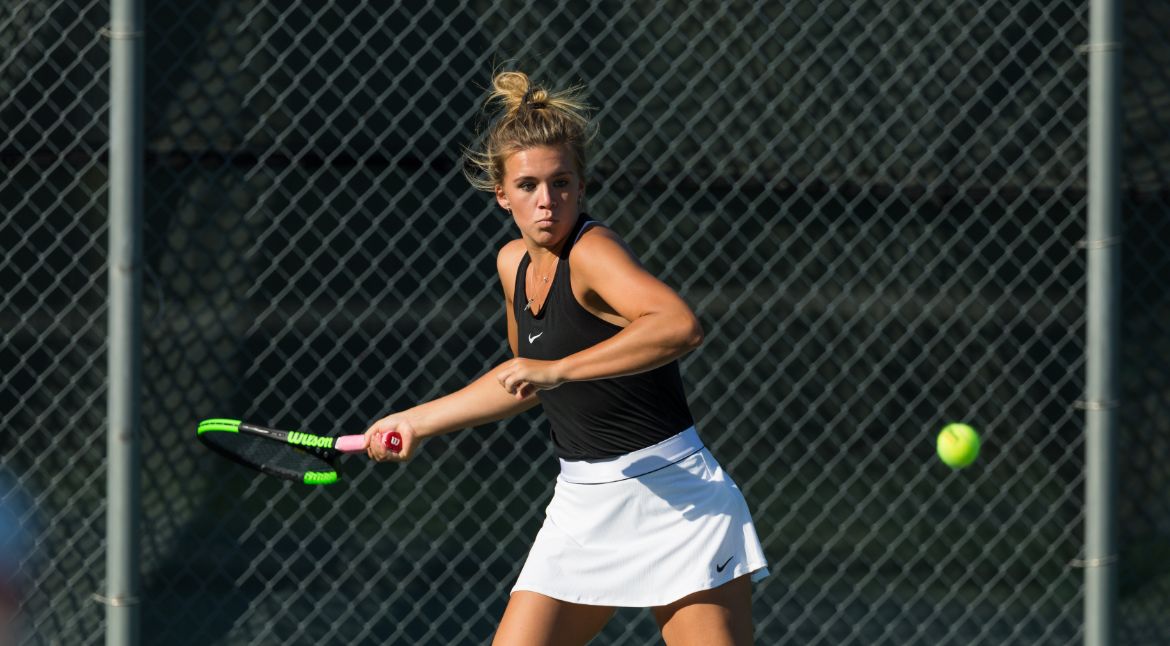 Claire Czerwonka has had success on the tennis courts, in the classroom and in the community during her time at Valpo.

Every so often, a student-athlete will come to campus seemingly destined for greatness. Her attitude, dedication and raw talent are undeniable. She may leave with records and plaques lining the halls, but her real impact is on the players, coaches and professors with whom she worked.

This example of a student-athlete destined for greatness is who Valparaiso University women’s tennis head coach Bob Modesto thinks he has found in Claire Czerwonka ’21.

“Coaching Claire has been a phenomenal experience,” Modesto said.

Modesto has developed an eye for talent over the years. After more than 20 years of coaching — and raising three children who went on to play Division I tennis themselves — he knew Czerwonka was special.

Czerwonka, a four-star recruit out of Kenosha, Wis., has been playing tennis all her life. When she was 4 years old, she convinced her parents to let her play tennis. They listened, and she never stopped.

When Czerwonka came to Valpo as a freshman in 2017, she was on the heels of an historic career at Saint Joseph Catholic Academy. During her sophomore, junior, and senior seasons, Czerwonka compiled an 89-2 record and won three state championships. Her senior year, she did not lose a set. The numbers speak for themselves, and Claire’s numbers speak of greatness. Recently, the Milwaukee Journal Sentinel listed her as a top-100 athlete of the decade from southeast Wisconsin — a list that includes athletes who are now in the MLB and NFL, as well as several Division-I national champions.

“As a parent of a Valpo women’s tennis player, I had an opportunity to see Claire play the last couple years,” Modesto recalled. “She was a big factor in why I wanted this job. What I didn’t realize, as a parent, was her tremendous work ethic. As a coach, this is a delight.”

“I would get there at about 5:50,” Modesto said. “I never wanted to be late to our practice sessions. But every time, Claire was there before me. In my 20 years of coaching, her work ethic is up there at the top. I’ve had some great players in the past, and her work ethic is certainly at the top.”

Czerwonka’s hard work has hardly gone unrewarded. Before the start of the 2019-­2020 season, Czerwonka was named team captain as a junior. She sits ninth all-time on Valpo’s career doubles victories list. Her freshman season, she entered the top-10 for single-season doubles victories with 15. She also sits just outside of the top-10 in career doubles winning percentage.

Czerwonka and Modesto both had one word to describe the star player’s mentality when it comes to competition on the court: fight.

“Without exception, Claire’s fight out on the court is tremendous,” Modesto said. “I use the phrase: ‘We are going into the foxhole together.’ We are going into battle together. There’s no one I’d rather be in that foxhole with than Claire. She has that fighter mentality.”

Czerwonka echoed that sentiment: “It’s always a battle. Playing at one [No. 1 singles], I’m always playing against the best player on the team, I’m never going to have an easy match. Every one of us is out there fighting. If you look at the scores, we are always going to third sets. Nothing is ever given to our opponents.”

One of the people Claire sees this most in is her sister — Olivia Czerwonka ’23.

“It’s amazing; it’s one of the best things in the world,” Claire said about being on a team with her younger sibling.

Olivia has quickly moved up through the program’s ranks as well. After one season on the team, the freshman ranks top-10 in both singles and doubles career winning percentage.

“If you would have asked me a year ago, I would have never thought this would happen, playing with Olivia,” Claire said. “It’s cool because we are really close, and we grew up playing together. It’s so nice to have someone there for you, not just on the tennis court, but in all aspects.”

“To have Claire and Olivia play together is awesome,” Modesto said. “Being doubles partners helps them because they certainly know each other. They communicate very well and both battle extremely hard.”

In their most recent performances, the Czerwonka sisters won each of their final two matches playing at No. 1 doubles to earn MVC Doubles Team of the Week.

Stopping here would make for quite a story: A lifelong tennis player finds a home at Valpo and quickly marches her way into the program’s record book, right alongside her sister. However, as impressive as her on-court resumé is, tennis is only one side of Czerwonka’s story. In the classroom Claire is a nursing major, one of the most intensive programs on campus.

“Nursing is a rough program on any given day, and to be an athlete on top of that...I don’t know how she does it,” said Stacey Wiszowaty, Valparaiso University adjunct professor of nursing and Czerwonka’s former clinical supervisor at Porter Hospital.

Czerwonka thrives on the grind of school and athletics. If she’s not hitting aces on the court, she’s hitting the books preparing for her next exam.

“I love it; I love being busy,” the star student-athlete said. “I always have something to do. It helps me keep on top of my work.”

Czerwonka is enjoying as much success in nursing as she is on the court. She has been named to the Dean’s List three times and maintains a 3.44 GPA, and she’s also a leader, on and off the court. In addition to being team captain, Czerwonka is a member of the Student-Athlete Advisory Committee (SAAC). She also helps to organize a student-led study group with her nursing peers. Although she is involved in many areas on campus, Czerwonka’s efforts are never diluted.

However, after some thought, Wiszowaty offered a correction: “She gave 110%, every time.”

For all of Czerwonka’s ferocity on the court and tireless efforts in the classroom, she has not lost touch with the ideals of caring and charity which are so prominent at Valpo. Czerwonka’s history of community service includes serving meals for those in needs through St. Theresa of Avila Catholic Student Center, engaging in activities with elderly adults at St. Agnes Adult Daycare, educating local elementary and middle-school students about cyber-bullying and online safety and organizing a physical education class for youth at Valparaiso Nazarene Church.

Giving back is where Czerwonka feels most accomplished. She recalled the rewarding experiences she has had as a volunteer at Tradewinds in Merrillville. There, she worked with non-verbal individuals with special needs. For Czerwonka, this opportunity was “eye-opening.”

“I count my blessings,” Czerwonka said. “I have a really good family and support system. I’m blessed to play tennis, and I want to give back.”

How is she able to not only manage (and excel at) so many facets of her life on campus and in the community? Czerwonka gives a lot of that credit to the University.

“I love Valpo,” she said. “Everyone is so nice and really accommodating. I’ve been so successful because of the school. Valpo is my home away from home. After visiting here three years ago, I knew I had to go here.”

Czerwonka embodies the University’s values. Her complete commitment and devotion to her craft — in the classroom, on the court, and in the community — is clear. Her potential? Czerwonka thinks she has more in her.

“I want to leave my mark [on the program],” she said. “I know I’m in the record book for doubles, and I want to get there for singles as well.”

With all she has accomplished, she is still fighting. She is still giving 100% effort; it’s all she knows. After finishing her undergraduate degree in May of 2021, Czerwonka is looking forward to completing her graduate degree at Valpo.

“I want to come out with a degree that helps me help others,” she said.

As for tennis, Czerwonka knows the future is a little uncertain. Given the abrupt cancellation of her 2020 campaign, many athletes have been left without a clear image of their athletic futures. Still, Czerwonka is focused on competing.

“I want to finish my tennis career in the best way possible,” she said. “I don’t know what it’s going to be, but I want to have a good ending.”

“I think our goal is to have Claire leave with the record in doubles wins,” Modesto said. “I could go on forever. I am absolutely a fan of Claire. I’d run for president of the Claire Czerwonka fan club if I could.”