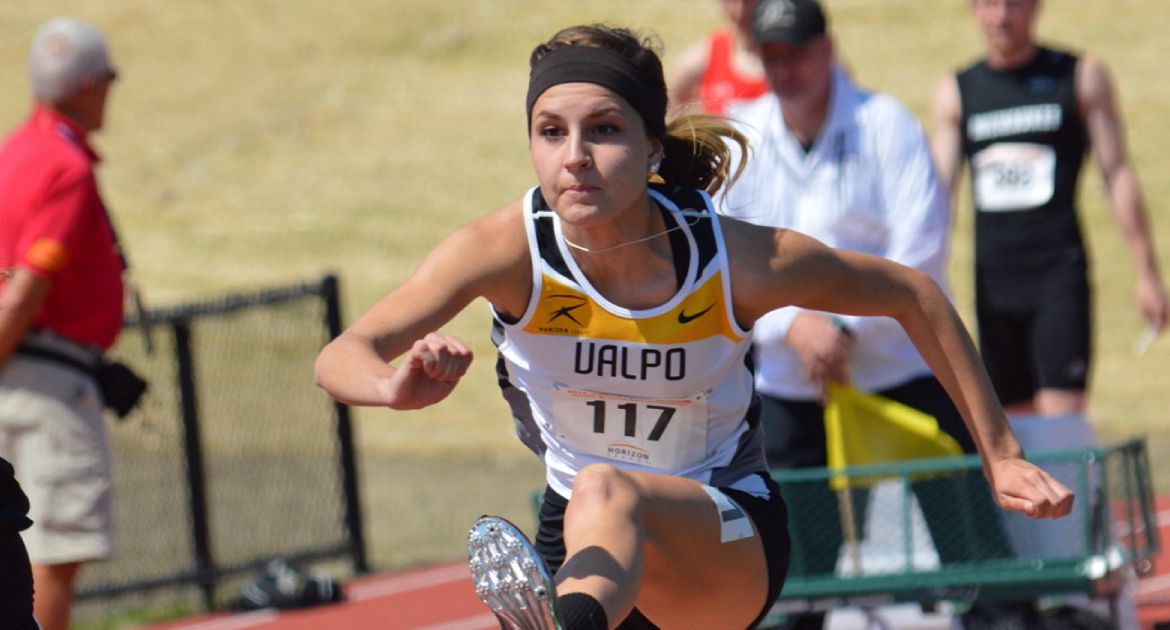 Hannah Reynard moved into fifth in Valpo history in the 400m hurdles.

The Valparaiso University men’s and women’s track and field squads traveled just across the state border into Chicago, Ill. to compete at the DePaul Invitational on Saturday.

The Crusaders took home second place on both the men’s and women’s sides, scoring 28 points in the women’s meet and 72 in the men’s. DePaul was crowned champions on both sides.

Saturday was highlighted by a new school record in the hammer throw from senior Jacob Smutz. Smutz posted a mark of 204’10” to claim first place in the hammer, over 13 feet better than the second-place finisher and breaking his own record – set earlier this season – by better than two feet.

Freshman Andrew McKissick led the Crusader pack in the javelin throw as Valpo swept the points in the event, recording a toss of 166’1”. Jonathon Heagy claimed first-place honors in the high jump with a height of 6’2 ¾”, a PR in the event, while sophomore Andrew Guzek posted a PR and moved into fifth place all-time in Crusader history in the shot put with a mark of 50’0 1’2”.

On the track, the Crusader men swept the top three positions in the 100 meter dash, led by junior Jeru Lollis, who crossed the line in 11.00 seconds. Lollis also earned a second-place finish in the 200m dash with a time of 22.41 seconds – his best effort as a Crusader. The 4x100m relay team of Montell Hall, Malik Riley, Alex Ruscitti and Aaron Clark Jr. placed first with a time of 43.22 seconds, while Dan Walters and Max Morello earned the top two spots in the 5K.

On the women’s side, the Crusaders posted a trio of first-place finishes – two of which cracked Valpo’s all-time charts. Sophomore Hannah Reynard crossed the line in the 400m hurdles in 1:06.49, fifth-fastest in Crusader history, while senior Ann Chapman claimed top honors with a leap of 17’0 ¾” in the long jump to move into fourth place on Valpo’s all-time chart.

Senior Heather Mende also earned a first-place finish, posting a mark of 110’1” in the javelin throw. Chidimma Ozodi finished in second place in the long jump, while sophomore Asia Banks crossed the line in the 400m dash with a time of 59.69 seconds to finish third. Freshman Abby Jankowski also picked up a third-place finish in the discus throw, moving into second place in Crusader history with her PR toss of 143’8”.

Valparaiso returns to action next weekend with a two-day trip to Louisville for the Lenny Lyles/Clark Wood Invitational, starting on Friday.