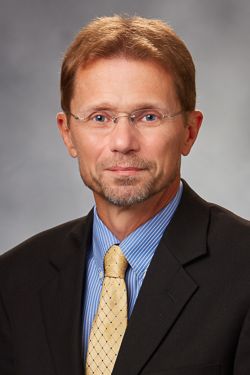 Mike Straubel completed his 34th season leading the Valpo men’s and women’s cross country teams in 2020-21. He is also an assistant coach on the track and field staff, working with Valpo distance runners.

During the 2020-21 season, Straubel instructed sophomore Eric Carothers, who earned All-MVC honors in cross country in addition to garnering MVC Scholar-Athlete Team recognition and the MVC Elite 17 Award, a prestigious honor that is presented to the student-athlete with the highest GPA among top finishers at the MVC Championship. Straubel also coached senior Dominic Paoletti, who earned indoor track & field All-MVC status for his performance in the 500-meter run, earned MVC Track Athlete of the Week honors and shattered the school record in the 10,000-meter run.

Straubel coached Alexander Bruno to one of the most accomplished indoor track seasons in the school’s history. Straubel traveled with the distance runners to the University of Boston on Feb. 15 where Bruno — one of the best runners in Valpo’s history — bested his own program record in the mile. Also at the meet, Bruno ran the program’s second-fastest time in the 3000-meter run. Bruno would go on to capture Valpo’s first MVC title in the mile. Entering the 2020 season, Valpo’s program record in the 5000-meter run had stood for 20 years. In the span of two meets, Dominic Paoletti and Jack Worman each broke that record. Bruno, Worman and Paoletti each also entered the record book in the 3000-meter run.

Straubel’s cross country teams saw great success in 2019 as the men’s squad cracked the regional rankings for the first time. The men’s cross country group garnered a top-5 finish at the MVC Championship, the program’s first top-5 finish at a conference meet since 2007. During the meet, Bruno earned all-conference honors by virtue of his eighth-place finish, while Paoletti finished 13th, giving him an all-conference honorable mention.

Straubel coached Liz (Bloy) Owen as she twice was named an All-Horizon League honoree, including a First Team recipient in 2014. Under his tutelage, Jessica Richardson was a three-time First Team All-Horizon League award winner (2012-2014) and finished her career second in program history in both the 5K and 6K.

On the men’s side, Straubel guided one of the best runners in program history in Aaron Crague. Crague held school records in both the 8K and 10K until those were shattered by another Straubel pupil (Alexander Bruno) in 2018. Craig earned First Team All Mid-Continent Conference accolades three times (1999-2001). He was also an Indiana All-State selection in 2000.

The Valpo mentor has seen his cross country runners total 48 All-League awards, 10 All-Indiana honors, six All-Region commendations, three Runner of the Year awards and two Newcomer of the Year awards. Straubel has also coached two Indiana State Champions. Crague, Liss and Rolf have also all been inducted into the Valpo Athletics Hall of Fame as well.

A former full-time professor in Valpo’s Law School, Straubel took three students from his Valparaiso Sports Law Clinic to Torino, Italy for the 2006 Winter Olympic Games. In Torino, Straubel and his staff provided free advice to any athletes in need of some type of legal support.