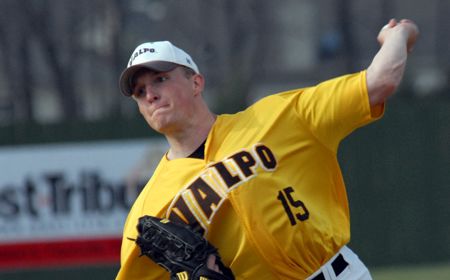 Valparaiso got two solid starting pitching performances and hit five homeruns on the afternoon as the Crusaders opened the 2009 season with a doubleheader sweep of Morehead State, 6-5 and 8-5, at Allen Field in Morehead, Ky. on Saturday.  The Crusaders have opened the season 2-0 for the first time since 1997.

“It’s great to start the season with two wins,” head coach Tracy Woodson said.  “We got two great starting pitching performances and had guys swing the bats well.  It’s a tough place to play with the short fence.

The host Eagles opened the scoring in the second inning of game one, on a homer by Michael Bottoms, the first of 10 long balls on the day with both teams utilizing the short porch in both right and right-center fields.

Valpo responded in the fourth with an unearned run scoring on a double play ground out.  Morehead State answered in the bottom of the inning with three runs, including back-to-back blasts to lead off the inning.

Josh Wallace (Bellefountaine, Ohio/Bellefountaine H.S.) tied the game in the fifth with the first of two homers for the junior.  His three-run shot plated Dan DeBruin (Combined Locks, Wis./Kimberly H.S.) and Matt Lenski (Milwaukee, Wis./Marquette University H.S.), both of whom had walked to lead off the inning.

Lenski added a homer of his own in the sixth to put the Crusaders on top 5-4 and Wallace’s second homer of the game an inning later increased the lead to two.

Morehead State added a run in the eighth, but Jarad Miller (Fort Wayne, Ind./Carroll H.S.) came in for the final two outs of the inning and pitched a scoreless ninth to earn his 10th career save, moving him into a tie for third on Valpo’s all-time list.

The night cap saw Valpo jump on top in the second with a RBI single by Billy Cribbs (Rochester, Mich./Rochester H.S.) and a sacrifice fly off the bat of Steven Scoby (Delton, Mich./Kellogg H.S.).

The Eagles scored three times in the fifth, all on a homer by Lucas Bainer, to take the lead, but the Crusaders answered with six runs in the sixth.  Kyle Gaedele (Arlington Heights, Ill./Rolling Meadows H.S.) led off the inning with a homer.  Scoby hit a three-run shot in the inning while Andrew Quinnette (Kokomo, Ind./Kokomo H.S.) also had a RBI single.

Morehead State scored twice in the bottom of the seven on a two-run homer by Daniel Pugh to close out the scoring.

Scoby finished the game with four runs batted in while Quinnette, Cribbs, and Damon McCormick (Louisville, Ky./Saint Xavier H.S.) had two hits each as part of a nine-hit effort by the Crusaders.  Bottoms finished 3-for-4 for Morehead State.

Valparaiso (2-0) and Morehead State (0-2) will wrap up their three-game weekend set on Sunday afternoon with a single game beginning at 12 p.m. CST at Allen Field.

Game Notes: Valpo committed just one error in the two games … DeBruin had a hit in game one of the doubleheader to extend his hitting streak to 17 games dating back to last season, only to have it end in game two.