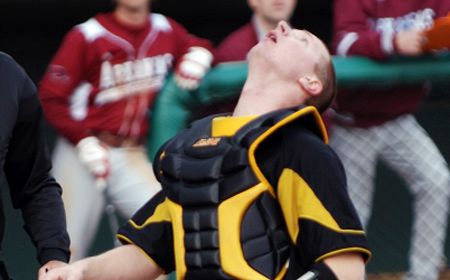 Valparaiso committed three errors on Friday afternoon, and after tying the game at five, saw Memphis score the game’s final four runs on the way to a 9-5 victory over the Crusaders at USA Stadium in Millington, Tenn.

“We kicked the ball around some today, and gave them some runs,” head coach Tracy Woodson said.  “We can’t do that and expect to win ball games.”

The Crusaders jumped on top first in the opening inning as Dan DeBruin (Combined Locks, Wis./Kimberly H.S.) led off the game reaching on an error and Kyle Muhlsteff (Yorba Linda, Calif./Esperanza H.S.) followed with a double.  A groundout by Andrew Quinnette (Kokomo, Ind./Kokomo H.S.) plated DeBruin and Josh Wallace (Bellefountaine, Ohio/Bellefountaine H.S.) followed with a run-scoring single to make it 2-0 Valpo.

Memphis took advantage of Valpo mistakes in the fourth to score three times, including one unearned tally.  A hit batter and two walks loaded the bases without an out, and a fielder’s choice scored two runs, including one on an errant throw.  A fielding error allowed the third run to score for the Tigers, and give the hosts their first lead of the game.

A sacrifice fly in the fifth and a run-scoring double by Jacob Wilson in the sixth gave Memphis a 5-2 lead before the Crusaders tied the game in the seventh.  Billy Cribbs (Rochester, Mich./Rochester H.S.) doubled home a run and scored himself on Ryan Shober’s (Inverness, Ill./Fremd H.S.) first collegiate round-tripper to left.

The Tigers answered with three in the bottom of the seventh.  A leadoff homer by Brett Bowen gave Memphis (4-5) the lead for good and the Tigers scored two more times while sending eight hitters to the plate in the frame.  Another sacrifice fly in the eighth capped the scoring.

Brennon Martin (2-0) earned the win for Memphis, allowing four earned runs in seven innings of work while giving up eight hits and striking out two.  Heith Hatfield pitched the final two innings to earn his third save of the season, fanning three.

John Snelten (Ingleside, Ill./Antioch H.S.) suffered the loss (0-2) for Valpo out of the bullpen, allowing three runs and three hits in just 0.2 innings while walking one.

Wallace and Muhlsteff each had two hits for Valpo while Cole Shelton drove home three runs for Memphis.

Valparaiso (4-4) and Memphis will play game two of their weekend series on Saturday afternoon with a 2 p.m. contest at USA Stadium.