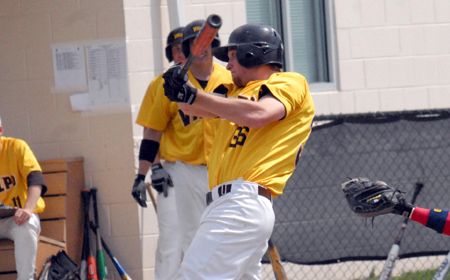 Valparaiso was able to tie the game at two in the sixth inning, only to give up the go-ahead run in the bottom of the inning on Sunday, and dropped a 3-2 game to Memphis at USA Stadium in Millington, Tenn. to finish off a weekend sweep of the Crusaders.

“This was a good baseball game,” head coach Tracy Woodson said.  “We played better, but just could not get the job done today.”

Memphis (6-5) opened the scoring in the first with a one out double off of the bat of Adam McClain.  A triple in the second, followed by a run-scoring single by Tyler Huelsing made it 2-0 Tigers.

Valpo starter Tyler Deetjen (Saint Charles, Ill./East H.S.) settled down in the middle innings of his first collegiate start, allowing the Crusaders to rally.  Matt Lenski (Milwaukee, Wis./Marquette University H.S.) had a pinch hit single up the middle in the sixth to score Kyle Gaedele (Arlington Heights, Ill./Rolling Meadows H.S.) and Andrew Quinnette (Kokomo, Ind./Kokomo H.S.), tying the game at two.  With runners on the corners and just one out, back-to-back strikeouts ended the inning without any more damage.

In the bottom of the sixth, Brett Bowen led off with a double, and scored what would be the winning run two batters later on a single by Trey Wiedman.

Duke Williams (1-0) earned the win out of the bullpen for the Tigers, striking out five in 2.2 innings of work.  Matt Yokley pitched a scoreless ninth for the save.

Deetjen (0-1) suffered the loss for the Crusaders, allowing three runs in 5.1 innings while giving up nine hits.  He did not walk a hitter.

“Deetjen threw strikes today,” said Woodson.  “It was a good outing for a freshman.”

Josh Wallace (Bellefountaine, Ohio/Bellefountaine H.S.) had two hits, including a triple, for the Crusaders to lead the six-hit offensive attack.  Drew Martinez went 3-for-4 to pace Memphis.

Valparaiso (4-6) will look to snap its losing skid on Wednesday afternoon with a day-night doubleheader in Starkville, Miss. against Mississippi State.  First pitch of game one is set for 2:30 p.m. with the nightcap slated for 6:30 p.m.  Game one can be heard live on WVUR (95.1-FM, Valparaiso) and online at www.valpoathletics.com while game two will be carried live on www.sportsjuice.com.