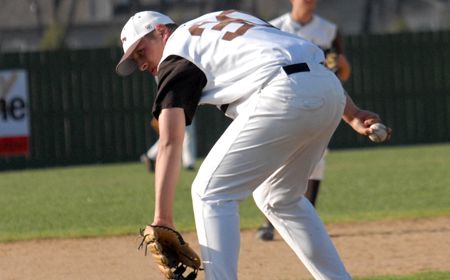 Valparaiso won the opener of Saturday’s doubleheader against Butler 10-5 at Bulldog Park in Indianapolis, Ind., but the host Bulldogs rallied to take the series finale, defeating the Crusaders 5-2 in game two of the twinbill.

In the opener, Valpo came out swinging the bats from the opening inning.  Eight of the nine batters in the lineup had at least one hit as the Crusaders pounded out 14 on the afternoon.  Josh Wallace (Bellefountaine, Ohio/Bellefountaine H.S.) drove home three runs while Steven Scoby (Delton, Mich./Kellogg  H.S.) registered three hits.

The duo got things going in the opening inning as Scoby tripled and with two outs Wallace hit his fifth homerun of the season to right field.

Damon McCormick (Louisville, Ky./Saint Xavier H.S.) added a run in the fourth on a single up the middle to score Kyle Gaedele (Arlington Heights, Ill./Rolling Meadows H.S.), and a RBI groundout in the fifth increased the lead to 4-0.

Butler got on the scoreboard in the bottom of the fifth with a double by Bobby Mosser, but the Crusaders extended their advantage in the seventh.  After two walks to lead off the inning, Wallace laced a single that scored Scoby.  Ryan O’Gara (Buffalo Grove, Ill./Buffalo Grove H.S.) added a run-scoring single up the middle and McCormick also plated a run singling through the right side.

Michael Letzler hit a two-run homer for the Bulldogs in the bottom of the seventh to bring the hosts within 7-3, but that would be as close as Butler would get.

O’Gara and Gaedele both added RBI singles in the eighth and Scoby had a run-scoring single in the ninth as the Crusaders tallied double digit runs for the second time in the weekend series.

Butler added single runs in the eighth and ninth, but Jared Miller (Fort Wayne, Ind./Carroll H.S.) came on in the bottom of the ninth with the bases loaded and got two strikeouts to earn his third save of the season.

Butler (2-16, 1-2 Horizon League) scored first in the nightcap, plating a run in the second on a ground out.  A RBI single by Steve Kaffel and a sacrifice fly increased the Bulldog run to 3-0 in the fifth.  Grant Fillipitch homered in the sixth and Alex Montagano followed with a triple and eventually scored on a two-out hit by Mosser.

The Crusaders broke through in the eighth with three straight singles to load the bases.  Ryan Shober (Inverness, Ill./Fremd H.S.), who went 2-for-3 in the game, scored on a wild pitch to bring Valpo within 5-1.  Another walk reloaded the bases with one out, and a sacrifice fly off the bat of Scoby plated Dan DeBruin (Combined Locks, Wis./Kimberly H.S.).

Valpo could not plate another run in the inning.  In the ninth, the Crusaders also put a pair of runners on via walks, but a double play helped the Bulldogs earn the win.

Jamie Feldheiser earned the win (1-0) for Butler, not allowing a run and surrendering just three hits in six innings of work.  Tyler Szymczak came on for the final three innings for his first save of the year.  Alex Berry (Olney, Ill./East Richland H.S.) suffered the loss (0-3), allowing five runs, three of which were earned, and seven hits in 5.1 innings of work.

Valparaiso (7-11, 2-1) will have nearly a week off before opening the 2009 home campaign at Emory G. Bauer Field next Friday to begin a three-game weekend series with Milwaukee.  First pitch is set for 3 p.m.