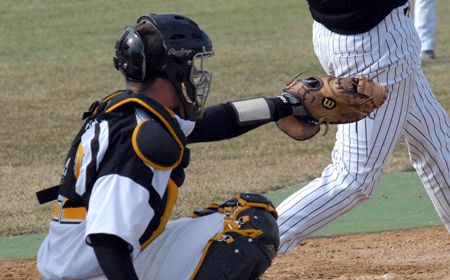 Billy Cribbs (Rochester, Mich./Rochester H.S.) singled home Steven Scoby (Delton, Mich./Kellogg H.S.) with two outs in the bottom of the 12th inning of game two to give Valparaiso its fourth doubleheader sweep of the season on Friday afternoon, as the Crusaders downed North Dakota 3-2 and 2-1 at Emory G. Bauer Field.

With two outs and no one on base, Scoby reached on an error and stole second.  Cribbs then singled into left-center for his second hit of the game to give the Brown and Gold the win.

“We needed a big hit and we finally got it,” head coach Tracy Woodson said.

The game was a pitcher’s dual throughout though.  Valpo scored first in the third as Kyle Gaedele (Arlington Heights, Ill./Rolling Meadows H.S.) was hit by a pitch with two outs.  A single by Dan DeBruin (Combined Locks, Wis./Kimberly H.S.) advanced Gaedele second and he then stole third.  Kyle Muhlsteff (Yorba Linda, Calif./Esperanza H.S.) came through with a single through the left side.

Valpo starter Tyler Deetjen (Saint Charles, Ill./East H.S.) kept the Fighting Sioux off of the scoreboard until the sixth.  Andrew Marek and Andrew Gudmunson both singled to put runners on the corners.  With one out, pinch runner David Dafforn stole home on a pickoff attempt at first as the batter showed bunt for a squeeze play to tie the game.

North Dakota (6-17) threatened again in the seventh of the game scheduled for just seven innings, loading the bases, but Justin Frane (Huntertown, Ind./Carroll H.S.) came in and got a strikeout and ground out to get out of the threat.

Brandon Baumbagtner went 10.2 innings on the mound for the Fighting Sioux, allowing just the one run and five hits while striking out five and walking four.  Jameson Benson then suffered the loss (0-2) allowing the unearned run in the 12th inning.

The opener was also a pitcher’s dual between Derek Biermaier and Alex Berry (Olney, Ill./East Richland H.S.) into the seventh inning.

Valpo broke through with three unearned runs as Scoby reached on a one out error and Damon McCormick (Louisville, Ky./Saint Xavier H.S.) followed with a double.  A walk to Gaedele loaded the bases and DeBruin put the Crusaders on top with a single into center.  Mulhsteff followed with a sacrifice fly to plate McCormick and Matt Lenski (Milwaukee, Wis./Marquette  University H.S.) added a run-scoring single to make it 3-0.

The Fighting Sioux responded in the eighth as Andrew Sadler had a two out single and Marek added a base hit to cut the lead to 3-2.  Jarad Miller (Fort Wayne, Ind./Carroll H.S.) got a bases loaded strikeout of Gudmunson though to get out of the jam and pitched a scoreless ninth to earn his seventh save of the season.

“Both starters were outstanding today,” Woodson said.  “They have been good all year.”

Lenski, who went 4-for-4 at Indiana on Wednesday, had a 3-for-3 game, including a double while DeBruin also had two hits.

“He (Lenski) was tremendous in the opener,” Woodson added.  “He’s a better hitter now that he can go the other way instead of just pulling everything.”

Valparaiso (12-15) and North Dakota (6-17) will wrap up their weekend series with another doubleheader on Saturday.  First pitch at Emory G. Bauer Field is set for noon with the action carried live on WVUR (95.1-FM, Valparaiso) and online at www.valpoathletics.com.