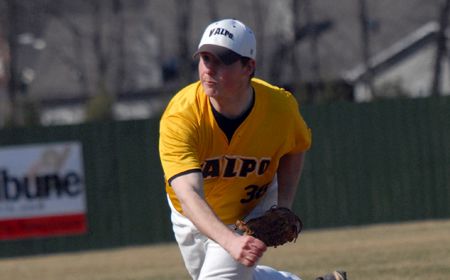 The fifth-year senior, who had struck out just nine hitters all season coming in, tied his career high with seven strikeouts while walking just one to get the victory (2-3).

“I think he had his best breaking ball of the year,” head coach Tracy Woodson said.  “He was able to locate it and kept hitters off balance.”

Valpo struck first in the third inning.  Steven Scoby (Delton, Mich./Kellogg H.S.) singled with one out to extend his hitting streak to 10 games and Kyle Gaedele (Arlington Heights, Ill./Rolling Meadows H.S.) followed with a walk.  Dan DeBruin (Combined Locks, Wis./Kimberly H.S.) hit a ground ball that appeared to be a double play ball, but the shortstop dropped the flip, loading the bases.  With two outs, Matt Lenski (Milwaukee, Wis./Marquette University H.S.) doubled to right-center to score all three unearned runs.

“Lenski’s been put in that situation all year and again he came through today,” added Woodson.

Bradley (14-24) got a run back in the fourth on a single by Adam Kimble, the last hit Snelten would surrender until the eighth.

“Those were two big runs for us,” said Woodson.

The Braves tried to rally in the eighth as Tommy Fitgerald doubled to score Tim Scanlan and a Crusader error, their third of the game, put two on with one out.  Justin Frane (Huntertown, Ind./Carroll H.S.) pitched out of the jam and Jarad Miller (Fort Wayne, Ind./Carroll H.S.) came on to pitch the ninth for his 11th save of the season, one of the Crusaders’ single season record.

“He just comes in and throws strikes,” Woodson said of Miller.

Valpo managed just five hits off of Bradley pitchers, including three off the starter Zieglre whoe went 5.2 innings and allowed all five runs, just two of which were earned.

Bradley had just five hits as well off of Crusader hurlers, all coming from the top four hitters in the lineup.

Valparaiso (20-19) will return to the diamond on Wednesday afternoon in DeKalb, Ill. to face Northern Illinois.  First pitch is set for 3 p.m. in a make up game from the March 31 postponement due to rain.