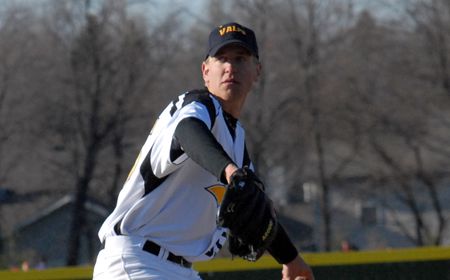 Valpo’s offense staked Deetjen to a 3-0 lead before he even took the mound as each of the first four hitters reached in the opening inning.  Matt Lenski (Milwaukee, Wis./Marquette University H.S.) doubled to left to score Dan DeBruin (Combined Locks, Wis./Kimberly H.S.) with the game’s first run.  A bases loaded fielder’s choice off the bat of Steven Scoby (Delton, Mich./Kellogg H.S.) plated Kyle Muhlsteff (Yorba Linda, Calif./Esperanza H.S.) with the second run and Andrew Quinnette (Kokomo, Ind./Kokomo H.S.) added a third run with a single up the middle to score Lenski.

The Huskies found the scoreboard in the third as Joe Buonavolanto’s two-out single, the first hit of the day against Deetjen, scored Pat Minogue, who reached on a walk and advanced on a groundout.

Damon McCormick (Louisville, Ky./Saint Xavier H.S.) made sure Valpo got the run back in the third, drawing a leadoff walk.  He then stole second, moving to third when the throw went into the outfield.  Kyle Gaedele’s (Arlington Heights, Ill./Rolling Meadows H.S.) sacrifice fly to right then scored McCormick to increase the lead to 4-1.

The Crusaders added to the lead, sending 10 batters to the plate and scoring four times.  Five straight singles, including RBI hits by Scoby, Quinnette, and McCormick, kept the baserunners moving.  Quinnette scored on a wild pitch for the fourth run of the inning, making it 8-1 Brown and Gold.

A run-scoring single by Muhlsteff in the seventh and a two-run double by Gaedele in the eighth allowed Valpo to continue adding on.  The Crusaders added one final run in the ninth as Bo McClendon’s (Chesterton, Ind./Merrillville H.S.) fly ball was dropped by the rightfielder allowing Paul Heinkel (Fond du Lac, Wis./Winnebago Lutheran Academy) to score.

“We swung the bats well again,” head coach Tracy Woodson said.  “It’s always a positive when we’re able to build upon our lead.”

Northern Illinois (15-28) added an unearned run in the ninth following two Crusader errors for the final run of the game.

“Deetjen pitched really well today,” added Woodson.  “We only took him out because of his pitch count.  Our bullpen was really solid then.”

Five Crusaders had two hits each as the Brown and Gold pounded out 13 on the afternoon.  Valpo also took advantage of five Husky errors.

Valparaiso (21-19) will return to Emory G. Bauer Field on Friday afternoon to open a three-game Horizon League series against Youngstown State.  First pitch is slated for 3 p.m. with all the action carried live on WVUR (95.1-FM, Valparaiso) and online at www.valpoathletics.com.