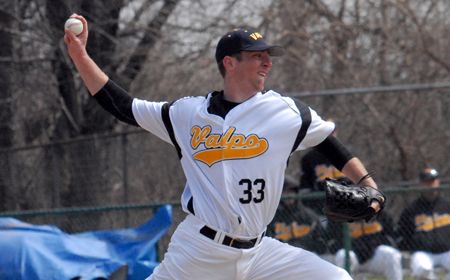 Valparaiso scored eight times in the sixth inning to come from behind and defeat Youngstown State 8-7 in the opener of Saturday’s doubleheader at Emory G. Bauer Field.  The Penguins capitalized on six Crusader errors in the nightcap though to earn a split with a 13-4 victory.

Youngstown State scored first in the opener on a Jacke Healey homer in the fourth inning, the Penguins’ first hit of the day.  The visitors added two more runs in the sixth on a fielder’s choice and a throwing error to make it 3-0.

Twelve hitters then came to the plate for Valpo in the bottom of the inning.  Matt Lenski (Milwaukee, Wis./Marquette University H.S.) put the Crusaders on the scoreboard with a two-run single to right-center.  Josh Wallace (Bellefountaine, Ohio/Bellefountaine H.S.) followed with a two-run hit of his own to make it 4-3 Valpo, and chase Youngstown State starter Cody Dearth.  After reliever Anthony Munoz got the first two hitters he faced, the Crusaders picked up the bats again.  Damon McCormick (Louisville, Ky./Saint Xavier H.S.) had a runs-scoring singles and two batters later Dan DeBruin (Combined Locks, Wis./Kimberly H.S.) capped the inning with a bases loaded double that cleared the bases.

A three-run homer by Jeremy Banks in the eighth brought the Penguins to within 8-6, and the guests added another run in the ninth and had the tying run aboard against closer Jarad Miller (Fort Wayne, Ind./Carroll H.S.) before he got a double play ball to notch his school record 13th save of the season, and 22nd of his career.

DeBruin went 3-for-4 with three runs batted in while Lenski had a two-hit game, the 21st of the season for the senior catcher.

Dearth suffered the loss (2-4) for the Penguins, allowing five runs and six hits in five innings.  Banks led YoungstownState’s offense with a 2-for-4 game and four runs batted in.

“We rallied when we needed to, and it was all in one inning in the opener,” head coach Tracy Woodson said.

Game two was close until the seventh inning.  Youngstown State jumped on top in the fourth with a pair of runs on a ground out and a RBI single by C.J. Morris.

The Crusaders responded with a run in the bottom of the inning on Andrew Quinnette’s (Kokomo, Ind./Kokomo H.S.) run-scoring single and he drove in the second run as well to tie the game at two in the sixth.

The Penguins batted around in the seventh, scoring five times, four on an inside-the-park grand slam by Jonathan Crist.  Valpo got two runs back in the bottom of the seventh on DeBruin’s first career homer, but Youngstown State scored three more runs in the eighth, aided by a Valpo error, and added two more in the ninth as the Crusaders made three more miscues.

“Our bullpen was not good in game two, nor was our defense,” said Woodson.  “We still have to play hard whether we have a big lead or a big deficit.”

Quinnette and Steven Scoby (Delton, Mich./Kellogg H.S.) each had two hits for Valpo in the night cap, as the Crusaders tallied just six hits total while striking out 14 times in the game.

“We’re happy to win the series and take two out of three,” concluded Woodson.  “However, we’re not satisfied.”

Valparaiso (23-20, 9-9), which had its five-game winning streak snapped in the night cap, will return to the diamond on Tuesday evening as the Crusaders host Northwestern at the U.S. Steel Yard in Gary.  First pitch is set for 7 p.m. with all the action carried live on WVUR (95.1-FM, Valparaiso) and online at www.valpoathletics.com.