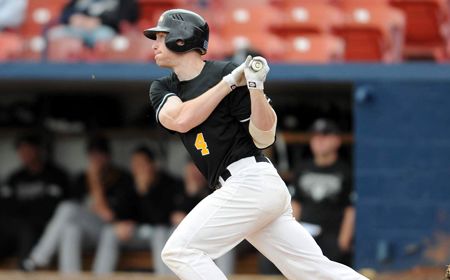 A five-run sixth inning put Valparaiso ahead to stay on Wednesday afternoon as the Crusaders defeated Western Michigan 10-7 at Chain of Lakes Stadium in Winter Haven, Fla.

“We got a bunch of key two-out hits in the inning,” head coach Tracy Woodson said.

The Broncos pulled within 7-6 with a two-run homer by Ryan McMillin in the eighth, but Jarad Miller (Fort Wayne, Ind./Carroll H.S.) came on to get the final five outs for his first save of the season.

The Crusaders added a couple of insurance runs in the bottom of the eighth, posting their third win in five games.

Valpo started the scoring in the second on RBI singles by Kyle Muhlsteff (Yorba Linda, Calif./Esperanza H.S.) and Karch Kowalczyk (Peru, Ill./La Salle-Peru H.S.) before Western Michigan tied the game in the third.  Single runs in the fourth and fifth gave the Broncos a 4-2 lead heading into Valpo’s five-run inning.

“Bryce pitched the best I’ve seen him throw in his three years here,” Woodson added.  “He handled the wind and allowed just one earned run until the wind-blown homer.”

Frane and Robbie Robinson (Brea, Calif./Olinda H.S.) each had three hits as part of a 14-hit attack by the Crusaders while Gaedele drove home three runs.

Brian Stroud suffered the loss (0-2) for Western Michigan (0-7), allowing 12 hits and seven runs in six innings of work.  He struck out nine.