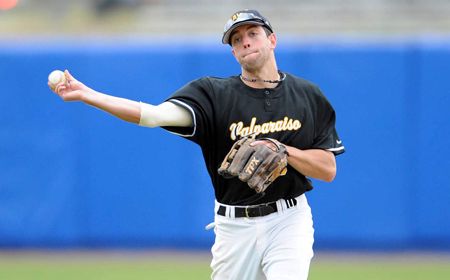 Damon McCormick (Louisville, Ky./Saint Xavier H.S.) allowed just one run in 6.1 innings of work on the mound but Fairfield came through with a two-out single in the bottom of the ninth to defeat Valparaiso 2-1 on Sunday morning at Chain of Lakes Stadium in Winter Haven, Fla.

McCormick scattered just five hits and walked just one while striking out eight for the Brown and Gold, but Valpo hitters managed just four hits against the Stags’ Rob Gariano.

“McCormick was outstanding for us today,” head coach Tracy Woodson said.  “It was a very good game and we made some plays.  Unfortunately they had a really good pitcher throwing against us today.”

The game was scoreless through the first six innings with limited threats.  Valpo put runners on the corners with two outs in the fourth, but a strikeout ended the scoring chance.  An inning later, another runner reached third with two outs, but was unable to score.

Fairfield (3-2) got a one-out triple in the second but McCormick got a strikeout and flyout to end the threat, and then worked out of a two-on, two-out situation in the fourth.

Valpo took the lead in the seventh as Kyle Muhlsteff (Yorba Linda, Calif./Esperanza H.S.) reached on an error and went to second on a sacrifice bunt by Karch Kowalczyk (Peru, Ill./La Salle-Peru H.S.).  Paul Heinkel (Fond du Lac, Wis./Winnebago Lutheran Academy) singled home Muhlsteff with two outs to give the Crusaders the lead.

Anthony Jajjar, who went 3-for-4 for the Stags, led off the bottom of the seventh with a homer to tie the game at one.  The game stayed that way until the bottom of the ninth when Marco Garamella and Chris Horning had back-to-back singles with one out.  A groundout advanced them to second and third, and with two outs Justin Nusblatt delivered the winning single.

Gariano went eight innings without a decision for Fairfield, walking three and striking out six while giving up the unearned run.  Mark Bordonaro (2-0) earned the win in relief.

Ryan O’Gara (Buffalo Grove, Ill./Buffalo Grove H.S.) had one of the four Crusader hits, extending his hitting streak to 14 straight games dating back to 2009.

Valparaiso (3-9) will head to Columbia, S.C. on Tuesday evening to begin a two-game midweek series with South Carolina.  First pitch is set for 6 p.m. CST.