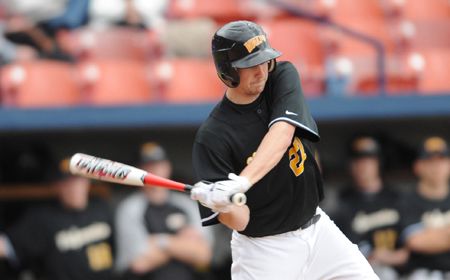 Kyle Muhlsteff (Yorba Linda, Calif./Esperanza H.S.) went 4-for-4 with a RBI for the Crusaders on Tuesday afternoon but Central Michigan spoiled Valparaiso’s home opener with a 17-4 victory at Emory G. Bauer Field.

Muhlsteff extended his hitting streak to five straight games with his first four-hit effort of his career at Valpo, but it was not enough as the Chippewas scored the final 11 runs of the game while pounding out 19 hits and taking advantage of five Crusader errors.

“We just weren’t very good today,” head coach Tracy Woodson said.  “We fought back to tie the game at four but then we just didn’t pitch.  A couple of early errors didn’t help either.”

Central Michigan (11-9) opened the scoring with two runs in the first, following a throwing error on a bases loaded fielder’s choice.  A run-scoring triple by Ricky Clark in the fourth increased the lead to 3-0 before Valpo tied the game.  Paul Heinkel (Fond du Lac, Wis./Winnebago Lutheran Academy) drove home David Klein (Aurora, Ill./Oswego East H.S.) and Muhlsteff with a double and scored on a squeeze bunt by Damon McCormick (Louisville, Ky./Saint Xavier H.S.).

The Chippewas retook the led in the fifth on a solo homer by Nate Theunissen but the Crusaders retied the game as Kyle Gaedele (Arlington Heights, Ill./Rolling Meadows H.S.) scored an unearned run on a RBI single by Muhlsteff.

With two outs in the sixth, four straight singles plated two runs for Central Michigan, giving the visitors the lead for good.  Thirteen batters then came to the plate in the eighth, as the Chippewas scored eight times on eight hits while also taking advantage of a pair of Valpo miscues.  A two-run pinch-hit double in the ninth and a error allowed Central Michigan to score the final three runs.

Bryce Shafer (Wabash, Ind./Northfield H.S.) started and suffered the loss (2-3) for the Crusaders, working 5.2 innings and allowing six runs, five earned, and nine hits.  He walked four and struck out six.  Bryce Morrow earned the win (1-0) for the Chippewas, pitching five innings and allowing four runs, three of which were earned, and seven hits while walking two and fanning three.

Heinkel, who along with Muhlsteff accounted for six of Valpo’s 10 hits on the afternoon, had two hits for the Brown and Gold, raising his average up to .444.  Justin Frane (Huntertown, Ind./Carroll H.S.) had a single in the opening inning to extend his hitting streak to eight straight games.

Dale Cornstubble went 4-for-6 with three runs batted in for Central Michigan while Theunissen and Billy Anderson also had three hits each.

Valparaiso (5-16) will continue its five-game homestand on Friday afternoon entertaining Chicago State in the first of a three-game series.  First pitch is slated for 3 p.m. at Emory G. Bauer Field.