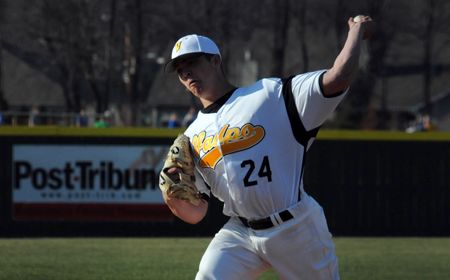 Valparaiso erupted for nine runs in the first inning and pounded out 18 hits total on the afternoon as the Crusaders returned to the victory column with a 17-1 triumph against Indiana-Northwest on Wednesday afternoon at Emory G. Bauer Field.

The Crusaders jumped on top in the opening inning, sending 13 batters to the plate.  Cribs drove home a pair of runs while Scoby led off the game with a double before adding his first three-run homer to cap the scoring.

Scoby again unloaded with a three-run blast to right in the second as Valpo posted a 13-0 lead after two.

The Brown and Gold added a single run on a throwing error in the third and scored three more times in the fourth.  Scoby had a run-scoring single as did Damon McCormick (Louisville, Ky./Saint Xavier H.S.) while Kyle Gaedele (Arlington Heights, Ill./Rolling Meadows H.S.) plated Valpo’s final run with a triple to left-center.

Gaedele, McCormick, and Justin Frane (Huntertown, Ind./Carroll H.S.) each had two hits for Valpo, which saw every starter record at least one.

Indiana-Northwest (1-34) scored its lone run in the seventh, taking advantage of two walks and two groundouts, with Alex Ramirez earning the RBI.

Jimmy Flores started and suffered the loss (0-5) for the RedHawks, allowing 14 runs, 13 of which were earned, and 13 hits in three innings of work.

Valparaiso (12-19) will continue its current homestand on Friday afternoon to begin a three-game Horizon League series against Cleveland State.  First pitch is set for 3 p.m. at Emory G. Bauer Field.