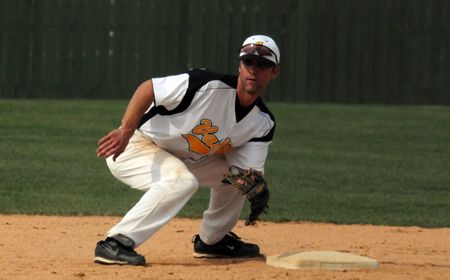 The Crusaders have now won 11 of their last 14 overall to move within three games of the .500 mark.

Tyler Deetjen (Saint Charles, Ill./East H.S.) went six innings allowing just three hits and striking out five for the win (2-1) while three Crusader relievers came on to pitch an inning each and finish the game up.  Eighteen straight Cougars were set down at one point from the third through ninth innings against the Crusader hurlers.

“Our pitching was good today,” head coach Tracy Woodson said.  “Deetjen threw the ball well and our staff did not walk a hitter.”

Valpo jumped on top in the opening inning, as Scoby and Muhlsteff led off with singles and Scoby scored on a fielder’s choice ground out.  A Muhlsteff double and a single by Kyle Gaedele (Arlington Heights, Ill./Rolling Meadows H.S.) in the third made it 2-0 Crusaders.

The Brown and Gold took advantage of three Saint Francis errors in the fifth inning while sending 12 batters to the plate and scoring six times.  Two straight errors led off the inning and a bunt single by Muhlsteff loaded the bases.  Justin Frane (Huntertown, Ind./Carroll H.S.) drew a bases loaded walk and Gaedele plated another run with a single to make it 4-0.  The third error of the inning scored two more runs and Klein and Scoby both added run-scoring singles as Valpo built an 8-0 lead.

“We took advantage of their mistakes,” Woodson added.  “We continued to get timely hits.”

Deetjen, along with Matt Carroll (Rockton, Ill./Hononegah H.S.) and Gaedele continued to retire Cougar hitters in the seventh and eighth. In the ninth Saint Francis scored an unearned run on a double by Taylor Futterknecht.

Patrick Brown started and suffered the loss (2-4) for Saint Francis (11-32-1), allowing eight runs, only two of which were earned, and 10 hits, while walking one and fanning one.  Jon Saporsantos had two of the Cougars’ five hits to lead the offense.

Valparaiso (16-19) will look to continue winning ways on Tuesday afternoon as the Crusaders host IPFW.  First pitch is set for 3 p.m. at Emory G. Bauer Field.