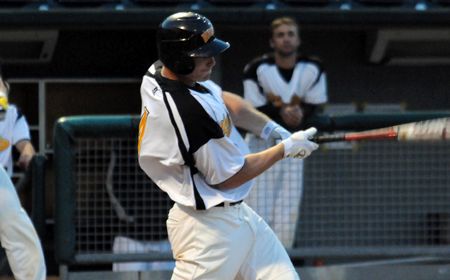 Valparaiso hosted the inaugural SouthShore Showdown on Wednesday evening at U. S. Steel Yard in Gary, Ind., but it was Notre Dame that came away with an 8-1 victory over the Crusaders to spoil the festivities.

Six Fighting Irish pitchers limited Valpo to just five hits on the evening, and not more than one in any inning.

“We just could not get our offense on track tonight,” head coach Tracy Woodson said.

Notre Dame struck first in the opening inning.  Ryan Connolly led off with a double just inside the bag at third.  Following a hit batsman and an infield single, Billy Boockford singled to left to put the Fighting Irish in front 2-0.

Connolly again doubled to left in the second to score another Notre Dame run and scored one batter later on a ground out, giving the Fighting Irish a four run advantage.

Austen Siwiec (Aurora, Ill./Marmion Academy) came on in the third for the Crusaders, throwing three scoreless innings while striking out six.

Valpo put threatened in both the fourth and sixth innings, as Kyle Gaedele (Arlington Heights, Ill./Rolling Meadows H.S.) and Justin Frane (Huntertown, Ind./Carroll H.S.) led off with doubles respectively, but the Crusaders could not push either run across.  Frane’s hit extended his hitting streak to 14 straight games.

The Crusader bullpen continued to shine, as Steve Godawa (Buffalo Grove, Ill./Buffalo Grove H.S.) struck out two and Matt Carroll (Rockton, Ill./Hononegah H.S.) fanned the side in the seventh to keep the deficit at four.

“Our middle relief pitched really well today,” Woodson added.  “We are going to need that if we want to continue to win games down the stretch and heading into the conference tournament.”

The Fighting Irish added four insurance runs in the ninth, one on a throwing error and three more on a homerun to left by Connolly.

Valpo finally found the scoreboard in the bottom of the ninth as Gaedele tallied his second double of the day and scored on a one out groundout by Paul Heinkel (Fond du Lac, Wis./Winnebago Lutheran Academy).

Connolly finished the game 3-for-5 for Notre Dame (19-22), with two doubles and a homer along with four runs batted in.  He was named the game’s first Most Valuable Player.  Gaedele was the only Crusader with a multi-hit game.

Valparaiso (17-22) will return to action on Friday afternoon in Milwaukee, Wis. as the Crusaders host the Panthers of Milwaukee.  First pitch of the three-game weekend series is set for 3 p.m.