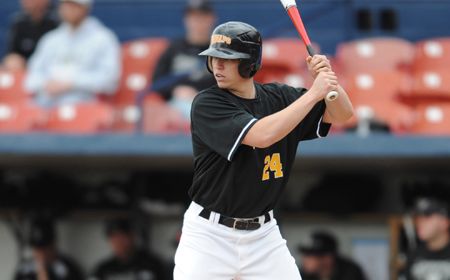 Will Hagel went 2-for-3 with two walks and drove home three on the evening. (Dave Schofield)
Valparaiso at Northwestern | May 04, 2010
Related Links
Related Links

Every starter had at least one hit for Valparaiso on Tuesday evening, but Northwestern rallied from a 7-2 deficit, scoring eight runs in the sixth inning to defeat the Crusaders 10-8 at U. S. Steel Yard in Gary, Ind.

“We swung the bats again tonight which is good to see,” head coach Tracy Woodson said.  “We scored some runs early, but need to keep on scoring.”

The Crusaders staked starting pitcher Tyler Deetjen (Saint Charles, Ill./East H.S.) to three runs before he even took to the mound in the opening inning.  Muhlsteff and Gaedele had back-to-back one out singles and Justin Frane (Huntertown, Ind./Carroll H.S.) loaded the bases drawing a walk.  Will Hagel (Arlington Heights, Ill./Prospect H.S.) cleared the bases with a double into the gap in left-center.

Northwestern cut into the Valpo lead in the second.  Chris Kontos put the Wildcats on the scoreboard with a triple to right, and scored one batter later on a double by Geoff Rowan.

Valpo immediately got those two runs back in the top of the third.  Billy Cribbs (Rochester, Mich./Rochester H.S.) delivered a bases loaded single to score Robbie Robinson (Brea, Calif./Olinda H.S.) and Karch Kowalczyk (Peru, Ill./La Salle-Peru H.S.) followed with a sacrifice fly to plate Frane, giving the Crusaders a 5-2 lead.

Deetjen, meanwhile, limited the Wildcat offense, scattering seven hits over his five innings of work.  The sophomore left-hander was aided by three double plays that were turned by the Valpo defense.

“We had the decision of whether to leave Deetjen in another inning or two or save him for this weekend,” Woodson said.  “Right now our conference weekend series against Butler is more important than midweek games.”

The Wildcats took advantage of defensive lapses by the Crusaders in the sixth.  Three Valpo errors aided Northwestern in scoring eight times in the inning on just four hits.  Paul Snieder’s grand slam to straight away leftfield capped the inning, and gave Northwestern a 10-7 lead.

“We didn’t make plays on routine ground balls and then gave up runs afterwards or turn what should be a double play,” Woodson added. “That hurts.  We just couldn’t get out of that one inning.”

Valpo tried to fight back in the eighth.  Steven Scoby (Delton, Mich./Delton Kellogg H.S.) led off with a single.  Muhlsteff followed reaching on an error after laying down a sacrifice bunt, moving Scoby to second.  A Gaedele single through the left side scored Scoby, bringing Valpo within two, 10-8.  Snieder came on to pitch as Northwestern’s closer, striking out the first two Crusaders before Hagel singled to left.  Rowan came up throwing, and gunned down Muhlsteff at the plate to end the Valpo threat.  Snieder then retired the side in order in the ninth to earn his 10th save of the year.

Matt Carroll (Rockton, Ill./Hononegah H.S.) suffered the loss (0-1) for the Crusaders in relief, allowing six runs, only two of which were earned, in just one-third of an inning.  Matt Gailey earned the win (1-1) for Northwestern, pitching 1.1 innings of scoreless relief.

Snieder finished the game 3-for-5 with four runs batted in to lead Northwestern (19-25) while Kontos also had a three hit night.

Valparaiso (18-25) will return home to Emory G. Bauer Field on Friday afternoon to begin a three-game Horizon League series against Butler.  First pitch of the series opener is set for 3 p.m.