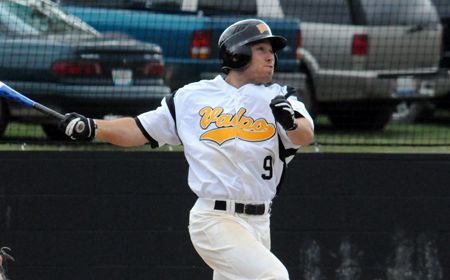 Valparaiso had to wait out a rain delay of more than four hours to start the 2011 baseball season on Friday, and once the Crusaders took the mound Austin Peay scored three times in both the fifth and sixth innings to rally from behind and down the Brown and Gold 7-3 at Raymond C. Hand Park in Clarksville, Tenn.

Steven Scoby (Delton, Mich./Delton Kellogg H.S.) and Ryan O’Gara (Buffalo Grove, Ill./Buffalo Grove H.S.) each had three hits for the Crusaders, but Valpo left 12 runners on base in the season opener.

Valpo jumped on top first with a pair of runs in the third inning after two were out.  Scoby doubled to left and freshman Chris Manning  (Lake Forest, Calif./El Toro H.S.) followed with an RBI triple to right. Manning also scored on the play following a throwing error.

The Crusaders threatened to add on in the fourth, loading the bases with no one out, but the Governors’ starter, Ryne Harper, struck out the next three hitters to end the threat.  Austin Peay then got on the scoreboard with a single run in the fourth on a lead-off home run by John Hogan.

O’Gara answered for the Crusader in the top of the fifth.  With Scoby on third and Kyle Gaedele (Arlington Heights, Ill./Rolling Meadows H.S.) on first, O’Gara delivered with a single through the right side with one out to plate Scoby and move Gaedele around to third.  Two more strikeouts ended the inning with just the one run for Valpo.

The Governors took the lead in the bottom of the fifth with three runs.  Three singles, a walk, and a sacrifice fly put the hosts on top 4-3.  Austin Peay added two more runs in the sixth, two of which were unearned.  Four hits and an error in the inning allowed the Governors to take the four-run lead, which proved to be the final margin of victory.

Valpo threatened two more times, putting two on with one out in the seventh and loading the bases in the  eighth, but could not push any more runs across the plate.

Valparaiso (0-1) and Austin Peay (1-0) will return to the diamond on Saturday afternoon for game two of the three-game weekend series.  First pitch is set for noon.