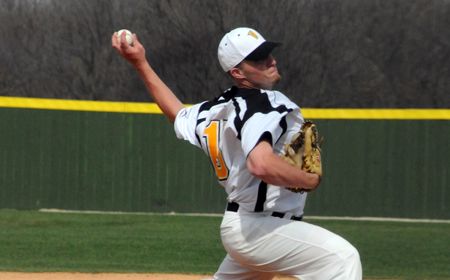 Five Valparaiso University errors led to four unearned runs for Cal Poly on Sunday afternoon as the Mustangs completed a weekend sweep of the Crusaders, downing the Brown and Gold 7-1 at Baggett Stadium in San Luis Obispo, Calif.

Jon Gulbransen (Appleton, Wis./Fox Valley Lutheran H.S.) worked 5.1 innings on the hill for the Crusaders, allowing just one earned run, but still suffered the loss (0-2) after allowing five total runs on only four hits.  He struck out two but walked five.

The Crusaders put two runners on in each of the first two innings, including the first two batters of the second, but were unable to plate a run in those frames.  Valpo finally found the scoreboard in the third inning as Kyle Gaedele (Arlington Heights, Ill./Rolling Meadows H.S.) drew a one-out walk.  After he stole second, Gaedele scored on a single by Robbie Robinson (Brea, Calif./Olinda H.S.).

Valpo would not get another hit the rest of the way though, drawing just two walks over the final six innings.

Cal Poly (4-6) answered the Crusader runs in the bottom of the third with three of its own.  A single, two walks, and three errors gave the Mustangs all the runs they would need for the victory.

The hosts were aided by another Valpo error in the sixth, which combined with a hit, a walk, and a hit batsman plated two more unearned runs.  Three singles in the seventh inning scored Cal Poly’s final two runs of the game.

The Crusaders managed just four hits in the game while Cal Poly had just seven, but took advantage of the miscues.  Steven Fischback earned the win (1-0) for the Mustangs, allowing just the one run and four hits in six innings on the rubber.

Valparaiso (1-11) will have five days off before returning to the diamond on Friday evening in Las Vegas, Nev. as the Crusaders begin a four-game series with UNLV.  First pitch of the series opener is set for 8:05 p.m. CST.