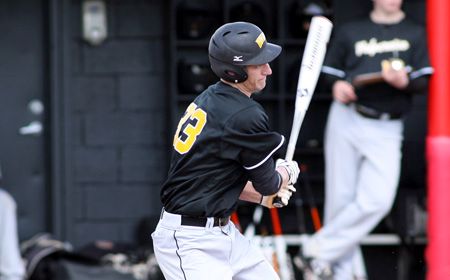 An unearned run in the bottom of the 11th inning lifted UNLV to a 6-5 victory over Valparaiso on Sunday at Wilson Stadium in the finale of a four-game weekend series in Las Vegas, Nev.

The Rebels jumped on top with a pair of runs in the opening inning before the Crusaders found the scoreboard in the third, scoring three unearned runs of their own.  Kyle Gaedele (Arlington Heights, Ill./Rolling Meadows H.S.) and Ryan O’Gara (Buffalo Grove, Ill./Buffalo Grove H.S.), who were aboard via a fielder’s choice and a walk respectively, both scored as Cyrus Wimberly (Rockford, Ill./Guilford H.S.) reached on a two-base error to tie the game.  Karch Kowalczyk (Peru, Ill./La Salle-Peru H.S.) then plated Wimberly as he reached on another error, giving the Brown and Gold a 3-2 lead.

Valpo added to its lead in the fourth.  Michael Morman (Rockford, Ill./Boylan Catholic H.S.) was hit by a pitch to lead off the inning and Chris Manning (Lake Forest, Ill./El Toro H.S.) drew a walk.  Steven Scoby (Delton, Mich./Delton Kellogg H.S.) loaded the bases after a bunt single and Gaedele plated Morman with a sacrifice fly to right, moving up Manning.  O’Gara followed with another sacrifice fly, giving the Crusaders a 5-2 advantage.

The Rebels pulled within a run in the seventh following a two-run home run by Rance Roundy, and tied the game in the eighth following a solo shot by Daniel Higa.

With the game moving to extra innings, the Crusaders threatened in the 11th frame.  Manning led off with a double and moved to third on a Scoby sacrifice bunt.  After Gaedele was intentionally walked, Max Javate registered back-to-back strikeouts for UNLV to end the threat.

The hosts then won the game in the 11th.  Higa reached on an error to lead off the inning and moved to second, then advanced to third on a fly out.  Hunter Beaty then delivered the game-winning sacrifice fly to end the series.

Javate earned the win (1-1) for UNLV (16-3) in relief while Kowalczyk suffered the hard-luck loss (0-1) allowing the unearned run.

Justin Frane (Huntertown, Ind./Carroll H.S.) started and pitched seven innings for the Crusaders, allowing four runs on 10 hits, and left with the lead.  He struck out six and did not walk a batter.

Scoby, Robbie Robinson (Brea, Calif./Olinda H.S.), and Morman each had two hits for the Crusaders to lead Valpo’s eight hit attack while Trent Cook and Marvin Campbell each had three hits for the Rebels.

Valparaiso (1-15) will return to action on Friday evening, traveling to Edwardsville, Ill. to face SIU Edwardsville.  First pitch is set for 6 p.m.