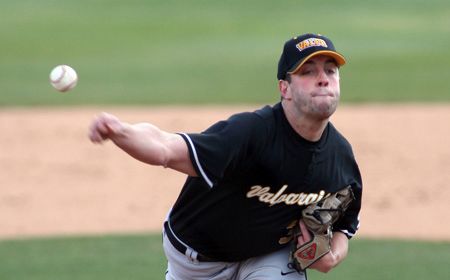 Valparaiso got a great pitching performance for the second straight day, this time by Damon McCormick (Louisville, Ky./Saint Xavier H.S.), but the Crusader offensive again was unable to produce a run as the Brown and Gold fell 1-0 to Creighton on Saturday at the Simmons Cooper Complex in Edwardsville, Ill.

“Damon was outstanding today,” head coach Tracy Woodson said.  “We’re just struggling with the bats.  We have to score runs.  If we get pitching like the last two days, we’ll win games.”

McCormick went the distance despite the loss (0-4), allowing just three hits and did not walk a batter over nine innings while striking out five, but a fifth inning run by the Bluejays proved to be the difference.  The complete game was the fourth of his career for the senior and the first this season.

Creighton (14-4) scored the game’s only run in the fifth following a lead-off double by Trever Adams.  After a sacrifice bunt advance him to third, Nick Judkins lifted a sacrifice fly to center to plate the run.

After a single in the first, McCormick retired 10 batters in a row before the double in the fifth.  Following the two-base hit, he again set down 11 more Bluejays in order before a two-out single in the ninth.

Jonas Dufak was just as dominating on the mound for Creighton, allowing just two Crusader singles in the game.  He walked won while striking out 13 for the shutout victory (3-0).

Kyle Gaedele (Arlington Heights, Ill./Rolling Meadows H.S.) had Valpo’s first hit, a single in the fourth.  Corey Thibault (Tustin, Calif./Foothill H.S.) added a lead-off single in the sixth, advanced to second on an error, but was thrown out trying to reach third in the Crusaders’ only scoring opportunity of the game.

Valparaiso (1-17) will wrap up action for the weekend on Sunday afternoon at the Simmons Cooper Complex playing host SIU Edwardsville in a rematch of Friday night’s 1-0 Cougars victory.  First pitch is set for noon.