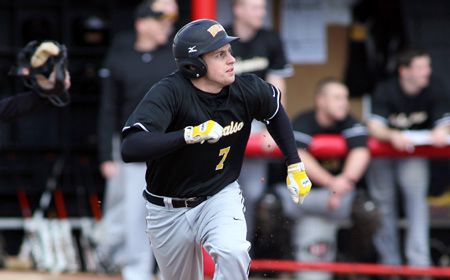 “We swung the bats well today,” head coach Tracy Woodson said.  “We had a lot of two-out RBIs, and scored our men that were in scoring position.  We played fundamental baseball and executed like we needed to.  It was nice to jump out in front early and continue to score runs.”

Valparaiso jumped on top in the third inning scoring a pair of unearned runs.  Martin reached on an error to lead off, and with two outs scored on a RBI single by Chris Manning (Lake Forest, Calif./El Toro H.S.).  Steven Scoby (Delton, Mich./Delton Kellogg H.S.) followed with a run-scoring double giving the Crusaders a two-run advantage.

SIU Edwardsville (5-13) cut into the Valpo lead in the bottom of the fifth, scoring twice on two singles sandwiched around a double.

Valpo got a run back in the sixth as Cyrus Wimberly (Rockford, Ill./Guilford H.S.) hit a sacrifice fly to score Martin, who had doubled to lead off the inning.

Martin added a pair of insurance runs in the eighth with a home run, which also plated Robinson who led off the inning with a single.

The Cougars tried to rally in the eighth, scoring three times on four singles and a walk, but that would be all the hosts would get as the Crusaders snapped their losing streak heading into conference play next weekend.

Martin, Robinson, and Manning all had two hits for Valpo to pace the Brown and Gold’s 10-hit attack.  Zach Hawkins went 3-for-4 with two runs batted in to pace SIU Edwardsville.

Jon Gulbransen (Appleton, Wis./Fox Valley Lutheran H.S.) started and worked 7.1 innings for the Crusaders to earn the win (1-3), allowing five runs on 10 hits.  He did not walk any batters while striking out four.  Josh Malin suffered the loss (1-2) for the Cougars, pitching seven innings, allowing eight runs, six of which were earned, on nine hits.  He walked one and struck out four.

Valparaiso (2-17) will return to action on Friday afternoon in Indianapolis, Ind. as the Crusaders face Butler in the first of a three-game series to open Horizon League play.  First pitch is set for 2 p.m. CDT.