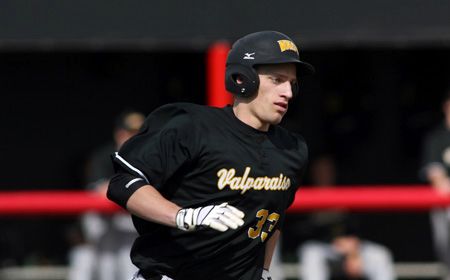 Indiana State took advantage of a pair of Valparaiso errors in the ninth inning to push across two runs, which proved to be the difference on Tuesday afternoon as the Sycamores defeated the Crusaders 3-2 at Emory G. Bauer Field.

Jon Gulbransen (Appleton, Wis./Fox Valley Lutheran H.S.) worked eight innings, allowing just four hits and did not walk any Sycamores, but suffered the tough luck loss (2-5).  He struck out six, moving into the top-five all-time at Valpo for punch outs with 225 over his four-year career.

“Gulbransen pitched well again today,” head coach Tracy Woodson said.  “The two errors in the ninth hurt.  We have to make those plays.”

Gulbransen had retired 13 straight hitters entering the ninth when Tyler Wampler led off with a single to right with Valpo leading 2-1.  Two Crusader errors on back-to-back sacrifice bunt attempts loaded the bases.  Koby Kramer tied the game with a single to center off of reliever Karch Kowalczyk (Peru, Ill./La Salle-Peru H.S.).  A bases loaded hit by pitch to Jon Hedges with one out then put the Sycamores on top.

Valpo took the lead in the third as Michael Morman (Rockford, Ill./Boylan Catholic H.S.) led off with a walk and moved to second on a balk by Indiana State starter Sean Manaea.  After he was sacrificed to third by Andrew Bain (Indianapolis, Ind./Park Tudor H.S.), he scored on a two out wild pitch.

Indiana State (16-10) tied the game in the fourth on a two-out home run around the right field foul pole by Robby Ort.

The Crusaders retook the lead in the fifth as Bain singled up the middle with two outs.  Kyle Gaedele (Arlington Heights, Ill./Rolling Meadows H.S.) scored Bain by lining a double into the right field corner, which just stayed fair, and put Valpo on top 2-1 until the ninth.

Valpo had a chance to add to the lead in the seventh as Robbie Robinson (Brea, Calif./Olinda H.S.) led off with a double and moved to third with one out, but back-to-back strikeouts ended the threat.

“We had a guy on third with the opportunity to make it 3-1,” Woodson added. “We have got to score him.  That would have changed the situation in the ninth.  Situational parts of the game we don’t perform well at right now.”

Colin Rea earned the win (6-1) in relief, pitching a scoreless eighth while Chris Machado tossed a one-two-three ninth for his first save of the year.

Valparaiso (6-21) will wrap up its five-game homestand on Wednesday afternoon with another non-conference contest.  Wabash will visit Emory G. Bauer Field with the first pitch set for 3 p.m.