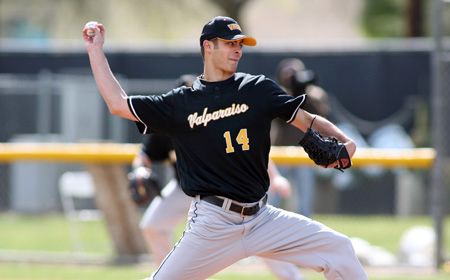 Upp walked just one and struck out two to earn his first collegiate win (1-0).  The freshman entered the game having pitched just nine innings total on the season.  The lone single he surrendered was a two-out infield hit in the second inning.

“We weren’t sure how long he’d be able to go since he hasn’t been stretched out,” head coach Tracy Woodson said.  “He threw all three pitches for strikes and pitched well.  I think he will be an integral part of our pitching staff over the next three seasons.”

Kevin Wild (Brown Deer, Wis./Brown Deer H.S.) and Kris Singh (Naperville, Ill./Waubonsie Valley H.S.) each pitched a scoreless inning in relief as four total Crusader hurlers combined on a three-hitter.  Wild fanned two and Singh struck out the side in the ninth.

Valpo jumped on top in the opening inning as Kyle Gaedele (Arlington Heights, Ill./Rolling Meadows H.S.) led off with a double down the line and scored on a two-out single by Will Hagel (Arlington Heights, Ill./Prospect H.S.).  Andrew Bain (Indianapolis, Ind./Park Tudor H.S.) then manufactured a run in the third by walking, stealing second, moving to third on a fly out, and scoring on a sacrifice fly by Steven Scoby (Delton, Mich./Delton Kellogg H.S.).

The Crusaders added to the lead in the fourth.  Robbie Robinson (Brea, Calif./Olinda H.S.) delivered a RBI double to score Hagel, who led off the inning with a walk.  Robinson then scored on a two-out hit by Michael Morman (Rockford, Ill./Boylan Catholic H.S.).

Robinson delivered another single in the fifth in which Chris Manning (Lake Forest, Calif./El Toro H.S.) scored from first base after the second baseman misplayed the ball as it was thrown in from the outfield.  Hagel drove home Valpo’s final run in the seventh with the third straight single of the inning to plate Scoby.

Wabash (11-16) scored its only run in the eighth inning as Chris Dieg led off with a single, moved to third on a double by David Seibel, and scored on a ground out by pinch hitter Ross Hendrickson.

Bain led the Crusaders on the afternoon with a 3-for-3 day at the plate in addition to drawing a walk.  He scored a run and added a stolen base.

“Every day it seems like he gets a walk, a hit, or does something to help us offensively,” Woodson said of Bain.  “The biggest thing we told him was he is in the lineup to make plays defensively.  His at bats have been a big bonus for us.”

Deig was the only Little Giant with a mulit-hit game, collecting two of the three for Wabash.

Chris Widup suffered the loss (2-4) for the Little Giants, working four innings and allowing four runs on five hits.  He walked two and struck out three.

“It was good to see us bounce back after yesterday’s tough loss,” Woodson concluded.  “We have a big series ahead for us this weekend.  We need to buckle down, get things done, and take care of business.”

Valparaiso (7-21) will begin a three-game Horizon League series at Cleveland State on Friday evening before the two schools play a doubleheader on Saturday.  First pitch on Friday night is set for 4 p.m. CDT in Avon, Ohio.