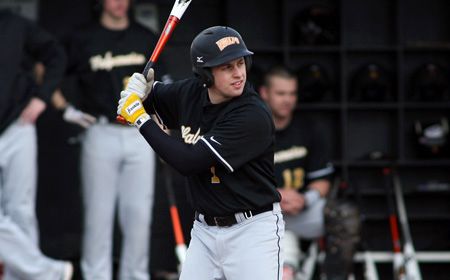 A three-run ninth inning broke open a tie game and lifted Valparaiso to a 4-1 Horizon League victory over Cleveland State on a cool, damp Friday evening at All Pro Freight Stadium in Avon, Ohio.

With the game tied at one entering the ninth, Chris Manning (Lake Forest, Calif./El Toro H.S.) led off with a walk and stole second with one out.  Robbie Robinson (Brea, Calif./Olinda H.S.) moved him up to third on an infield single in the hole at short.  Bobby Martin (Crystal Lake, Ill./Prairie Ridge H.S.) put the Crusader on top with a single into right-center, scoring Manning. With two outs Michael Morman (Rockford, Ill./Boylan Catholic H.S.) added a pair of insurance runs with a double over the head of centerfielder Alex Johnson, scoring Sam Carius (Napervile, Ill./Waubonsie Valley H.S.), a pinch runner for Robinson, and Martin.

“Big hits are something we haven’t been getting a lot of this year,” head coach Tracy Woodson said.  “This is a big win for us.”

Justin Frane (Huntertown, Ind./Carroll H.S.) went the distance to earn a complete game victory (1-1).  In the ninth he gave up a two out single, before getting a tap back to the mound to end the game.  Frane scattered seven hits and allowed just one unearned run.  He only walked one and struck out seven.

“Frane was not going to get the loss,” Woodson commented.  “He wanted the ball and did not want to be taken out for the ninth.

The game was a pitcher’s dual early as Frane and Cleveland State’s Anthony Sambula matched each other.

“Sambula pitches well all the time against us,” Woodson said.  “We need we needed to scratch out some runs and we finally got to him in the ninth.”

The Vikings scored first with an unearned tally in the fifth.  John Calhoun hit a grounder to third that was misplayed for an error with two outs.  Alex Johnson then hit a ball to center that was dropped on the run for another error, scoring Calhoun.  Johnson tried to score one batter later on a single to right by Anthony Sambula, but was gunned down at the plate on a strike by right fielder Kyle Gaedele (Arlington Heights, Ill./Rolling Meadows H.S.) to end the inning.

“I was disappointed we gave up that run with a pair of errors,” Woodson added.  “We did come back and match it though in the next inning which was big.”

The Crusaders responded in the top of the sixth.  Steven Scoby (Delton, Mich./Delton Kellogg H.S.) singled with one out and moved up on a walk by Manning.  A double steal moved both runners up and Will Hagel (Arlington Heights, Ill./Prospect H.S.) tied the game at one with a sacrifice fly to center.

Sambula suffered the loss (2-4), going the distance allowing the four runs and eight hits.  He walked three and fanned seven.

Gaedele finished the game 3-for-4 for the Crusaders while Martin added two hits, including the go ahead single.  Alex Johnson was the only Viking with more than one hit.

Valparaiso (8-21, 4-3 Horizon) and Cleveland State (6-20, 0-7) will wrap up the three-game weekend series on Saturday with a doubleheader.  First pitch is slated for 11 a.m. CDT at All Pro Freight Stadium.