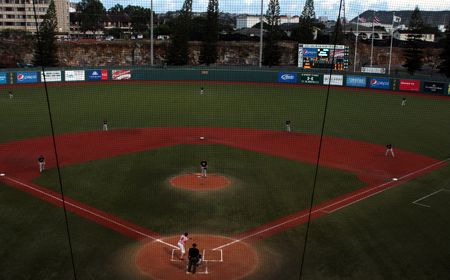 Hawai’i scored five times in the fifth and added two more runs in the sixth on Friday evening as the Rainbows defeated Valparaiso 9-8 in front of a paid attendance of 3,451 at Lew Murakami Stadium in Honolulu, Hawaii to snap the Crusaders’ 10-game winning streak, the second longest in school history.

With 2,325 fans passing through the turnstiles to watch the action, Valpo battled back from a four-run deficit, and put the tying run on base in the ninth, but in the end it was four errors and four walks that hurt the Crusaders.

“I’m disappointed because we scored enough runs to win,” head coach Tracy Woodson said.  “We gave away runs with walks and errors.  We had a good run and now we have to start again.”

Hawai’i struck quickly as Breland Almadova led off the bottom of the first with a homer to center.  Three errors in the second led to another Rainbow run as Collin Bennett delivered a RBI single.

The Crusaders added to the lead in the fifth.  Manning was hit by a pitch with two outs and Hagel singled to right.  Robbie Robinson (Brea, Calif./Olinda H.S.) reached on an error, scoring Manning and Valpo led 4-2 at the halfway point.

Hawai’i batted around in the bottom of the fifth though, scoring five times.  Two walks and an error loaded the bases for Kolten Wong, who delivered a two-run single to right.  After a RBI ground out put the Rainbows on top, Zack Swasey and Michael Blake added back-to-back singles and Hawai’i had built a 7-4 lead.

Bain started the offense again in the sixth, delivering a two out double down the right field line.  Two batters later, Scoby singled up the middle to make it a two-run game.

The Rainbows added two more in the sixth, taking advantage of two walks and a hit batsman, but could have done more damage, stranding the bases loaded.

Trailing 9-5 heading into the seventh, Valpo took advantage of a pair of Hawai’i errors, two of six Rainbow miscues on the night, to score a pair of runs, and cut the deficit in half.  Kyle Gaedele (Arlington Heights, Ill./Rolling Meadows H.S.) manufactured the Brown and Gold’s final run, drawing a lead off walk in the eighth.  He stole second and third before scoring on a Manning ground out.

“It was disappointing to have the lead and give it up,” Woodson added.  “However we battled back and made it a game until the final out.

Corey Thibault (Tustin, Calif./Foothill H.S.) singled with two outs in the ninth for the Crusaders against closer Lenny Linsky, but could do no more damage as he earned his eighth save of the year, striking out three in two innings of work.

Hagel went 3-for-5 for the Crusaders to lead Valpo’s nine hit attack.  Scoby and Bain each had two hits while Manning and Hagel had two RBIs each.

Almadova and Blake each had two hits for the Rainbows, part of a nine hit game.  Wong drove home three while Jeffrey Van Doornum added two more runs batted in.

Jarrett Arakawa earned the win (5-2) for Hawai’i, allowing five runs and seven hits in 5.2 innings of work.  He struck out four and walked one.  Tyler Deetjen (Saint Charles, Ill./East H.S.) suffered the loss (3-6) for Valpo, allowing seven runs, only three of which were  earned, and six hits in five innings.  He walked two and struck out five.

Earlier on Friday afternoon, Valpo moved into first place in the Horizon League standings by virtue of Wright State’s extra innings victory over Milwaukee.  The Brown and Gold is now assured of at least being tied for the top spot in the conference when they return to the mainland to begin next week.

Valparaiso (16-22) and Hawai’ i (22-16) will wrap up their three-game Easter weekend series on Saturday evening.  The first pitch of the rubber match of the series is slated for 11:35 p.m. CDT at Les Murakami Stadium.