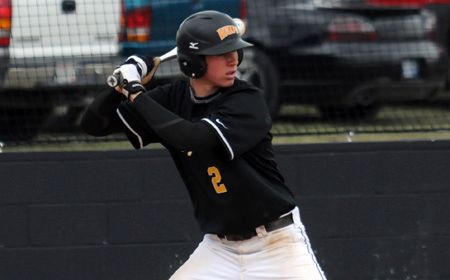 Valparaiso returned to Horizon League play at Emory G. Bauer Field on Saturday afternoon and split a doubleheader against Butler.  The Bulldogs rallied with six unearned runs in the seventh inning of game one to win 8-6 before the Crusaders took the night cap 11-4.

“I was disappointed we didn’t win both games today,” head coach Tracy Woodson said afterwards.  “That said I was pleased with the way we bounced back in game two after giving away the opener.  We scored early and continued to add on.”

The Crusaders added on in the third, sending 12 batters to the plate.  Scoby led off with a double and scored on a Manning single.  Hagel put runners on second and third with a ground-rule double and Robinson followed with a two-run double to the right-centerfield gap.  After Bobby Martin (Crystal Lake, Ill./Prairie Ridge H.S.) reached on a bunt single, Michael Morman (Rockford, Ill./Boylan Catholic H.S.) squeezed home Robinson, increasing the lead to 7-0.  Andrew Bain (Indianapolis, Ind./Park Tudor H.S.) followed with a RBI single, and after a walk to Gaedele, Scoby delivered his second hit of the inning to make it 9-0 Valpo.

That would be all the offense starting pitcher Damon McCormick (Louisville, Ky./Saint Xavier H.S.) would need.  He retired 13 straight Bulldogs from the third through the seventh innings as Valpo maintained its lead.

A two-run home run by Robinson to left in the six made it 11-0 Crusaders, and capped Robinson’s 3-for-5 game with five runs batted in.

Butler (16-20, 5-9 Horizon) finally cracked the scoreboard with two outs in the top of the seventh.  Three straight hits, including a double by Patrick Guinane and a single by Kyle Waggoner, plated two runs.  The Bulldogs added two more runs in the eight as Nick Hladek drew a bases loaded walk and Marcos Calderon added a sacrifice fly.

McCormick worked seven innings for the win (4-5), allowing just two runs and four hits while walking one and striking out six.  Kyle Kramp suffered the loss (2-3) for the Bulldogs, allowing seven runs and nine hits in the first two innings.

Scoby had three hits along with Robinson while Manning added two more and walked twice as part of Valpo’s 13-hit attack in the night cap.

The opener, a seven-inning game, saw the Crusaders jump on top in the third.  Bain doubled with one out and scored on a two-out two-bagger by Scoby.  Manning followed with a RBI single, making it 2-0 Valpo.

Butler tied the game in the top of the fourth on a two-run homer by Michael Letzter before a two-run double by Hagel in the fifth put the Crusaders back on top by two, a lead they would enjoy until the seventh.

In the seventh, Butler sent 11 men to the plate and took advantage of three Crusader errors to score six times on just four hits.  A two-run single by Letzter put the Bulldogs in front and Butler added to the lead on a wild pitch and the third error of the inning.

Trailing by four heading to the bottom of the seventh, Valpo fought back.  Scoby reached on a dropped pop up and moved to third on a single by Manning, his fourth hit of the game.  After another error on a pick-off attempt at first, Scoby scored and Manning raced around to third.  Martin delivered a run-scoring single to cut the deficit to 8-6 with two outs.  After another dropped pop up put the tying run on base, Brian Padove finally got the Bulldogs out of the jam to record his second save of the year.

Manning went 4-for-4 in the opener with two runs scored, giving him six hits on the day.  He reached on each of his first eight plate appearances of the afternoon.

“Chris has hit ball hard for us all year,” Woodson said.  “He finally found the holes and was rewarded for it today.”

Scoby and Bain each added two hits for Valpo in the opener, with Scoby also scoring three times.  Letzter had three hits for Butler as each team finished with 11 hits total.

Justin Frane (Huntertown, Ind./Carroll H.S.) suffered the loss (2-2) for the Crusaders, pitching 6.1 innings and allowing five runs, only two of which were earned.  He gave up nine hits but struck out seven and walked just one.  Dom Silvestri earned the win (4-3) for the Bulldogs, pitching six innings, allowing four runs on nine hits.

Valparaiso (18-23, 10-4) will wrap up the four-game homestand on Sunday afternoon hosting Cleveland State in doubleheader action.  First pitch is set for noon.