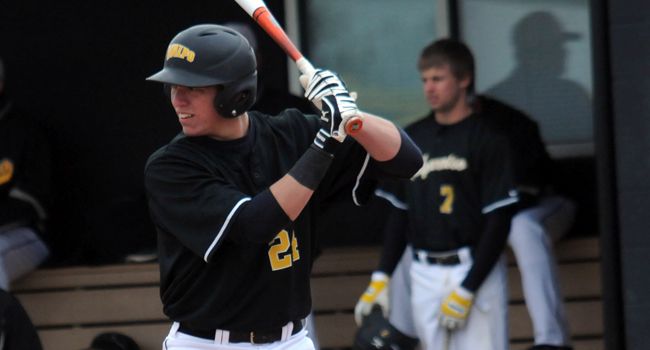 On a cold and rainy afternoon at Emory G. Bauer Field, Milwaukee spoiled Valparaiso’s Senior Day with a doubleheader sweep of the Crusaders, winning both games by the same 7-3 scores.

“I’m disappointed with the way the day went,” head coach Tracy Woodson said.  “We were excited to play to start off with, but just didn’t stay into the games mentally throughout.”

Milwaukee struck first in the opener.  Tell Taylor singled with one out in the first inning and moved to second on a ground out.  With two outs, Paul Hoencke delivered a run-scoring single.

The Crusaders bounced back in the bottom of the first.  Kyle Gaedele (Arlington Heights, Ill./Rolling Meadows H.S.) walked and Steven Scoby (Delton, Mich./Delton Kellogg H.S.) followed with a single.  After a wild pitch moved both runners up 90 feet, Chris Manning (Lake Forest, Calif./El Toro H.S.) plated Gaedele with a RBI ground out.  With two outs, Robbie Robinson (Brea, Calif./Olinda H.S.) put Valpo on top with a single up the middle.

The Panthers took the lead for good in the third, scoring four times, taking advantage of a Crusader error.  A bases loaded ground out back to the mound tied the game at two and Ryan Solberg put the visitors on top with a single.  Cole Kraft increased the lead to 5-2 with a two-run hit to right.

Valpo got one run back in the fourth, as Andrew Bain (Indianapolis, Ind./Park Tudor H.S.) reached on a two out error.  After a hit by Gaedele, Scoby delivered a run-scoring single.

Jonathan Capasso homered for Milwaukee to lead off the fifth and Kraft delivered another RBI hit later in the inning, another unearned run surrendered by the Crusaders.

Chad Pierce went all seven innings for the complete game victory (6-3) for the Panthers.  He allowed nine hits and the three runs, only two of which were earned.  He walked two and struck out four.  Jon Gulbransen (Appleton, Wis./Fox Valley Lutheran H.S.) suffered the loss (5-7) for the Crusaders, working six innings.  He allowed seven runs, three of which were earned, and 14 hits, while walking two and striking out five.

Scoby and Robinson each had two hits for the Crusaders while Kraft went 3-for-5 to pace the Panther offense.

“We weren’t able to overcome our mistakes,” Woodson added.  “We made too many of them, and need to find a way to bounce back from them.”

In the night cap the Crusaders struck first as the rain started to fall in the bottom of the third inning.  Michael Morman (Rockford, Ill./Boylan Catholic H.S.) led off with a single and moved to second on Bain’s sacrifice bunt.  Gaedele lined a double into left, scoring Morman with the game’s first run.  Scoby followed with a run-scoring single and Valpo had a 2-0 lead.

Prior to the start of the fourth inning, the rain became too heavy and play was halted for 55 minutes.  Milwaukee cut Valpo’s lead in half following the resumption of play on a two-out single by Jonathan Capasso.

The Crusaders extended the lead to 3-1 in the sixth as Corey Thibault (Tustin, Calif./Foothill H.S.) scored on a passed ball.

Milwaukee took the lead in the seventh.  Two singles and a hit batsman loaded the bases before Pierce scored on a wild pitch.  A ground out tied the game before a two-out error put the Panthers on top.  The guests added three more runs in the eighth on a squeeze bunt and a two-run home run by Kraft to close out the scoring.

The rains came down again in the top of the ninth, and the game was called with the Panthers batting and one out.

The Crusaders managed just five hits in the night cap while Capasso went 3-for-4 to lead Milwaukee’s 12-hit attack.

“We need to bounce back on this final road trip and try to position ourselves for the tournament,” Woodson concluded.

Valparaiso (21-28, 13-8) will head out on the road for the final five games of the regular season, beginning on Sunday afternoon with a doubleheader against UIC in Chicago.  First pitch is slated for 12:05 p.m.  The Crusaders and Panthers will then wrap up the 2011 regular season next Thursday and Friday with a three-game series in Milwaukee.