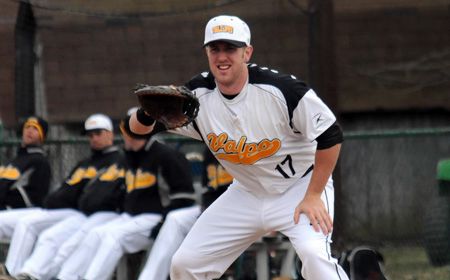 Valparaiso closed out the 2011 regular season on Saturday afternoon, splitting a doubleheader against the University of Wisconsin-Milwaukee at Henry Aaron Field in Milwaukee, Wis.  The host Panthers won the opener 6-5 in 10 innings before Valpo scored in eight of the nine innings  in the night cap to post a 14-2 victory.

The Crusaders broke out the bats in game two, tallying season highs for runs and hits in a game this year.  Valpo tallied 18 hits while also taking advantage of eight Panther walks and five hit batsmen.

“Hopefully the bats will stay hot for us heading into next week’s tournament,” head coach Tracy Woodson said.  “We had contributions from about everyone in the win in game two.”

The Crusaders continued to pile on runs, scoring a pair in the fourth on a single by Kyle Gaedele (Arlington Heights, Ill./Rolling Meadows H.S.) which was misplayed by a Milwaukee outfielder for an error as well. Martin added a RBI ground out in the fourth and Robinson’s second hit of the game made it 7-0 Valpo through five.

Milwaukee scored a run in the sixth on a home run by Cole Kraft, who had three hits in the game, but Valpo’s offense went back to work in the seventh after failing to score in the sixth, the only inning the Brown and Gold was kept off of the scoreboard.  Martin drove home his third run of the game in the seventh with a single, giving him a multi-hit game.

Will Hagel (Arlington Heights, Ill./Prospect H.S.) increased the lead to 9-1 in the eighth with his RBI hit before the Panthers added their final run in the bottom of the eighth on a double by Sam Sivilotti.

Valpo piled on five more runs in the ninth, batting around.  An error brought home the first run of the inning and Andrew Bain (Indianapolis, Ind./Park Tudor H.S.) tallied a RBI hit.  A bases loaded ground out by Hagel plated the third fun of the frame, and Bain added the fourth scoring on a wild pitch.  Robinson capped the scoring with a run-scoring double for his third run batted in of the contest.

Robinson finished with three hits in four at bats, reaching safely six times in the game after being hit twice and drawing a walk as well.  O’Gara also went 3-for-4 while Michael Morman (Rockford, Ill./Boylan Catholic H.S.) and Manning each added three hits as well, giving Valpo four players with three-hit contests.

Jon Gulbransen (Appleton, Wis./Fox Valley Lutheran H.S.) gave Valpo a strong start, working five innings of shutout baseball for the win (6-7).  The victory was the 18th of his career, moving him into fourth place on the Crusaders’ career chart.  He also became Valpo’s career innings pitched leader with 319.1, passing Tim Holmes (1984-1987) for the top spot.  Gulbransen allowed four hits and two walks while striking out one on the afternoon.

Jordan Guth started and suffered the loss (1-5) for Milwaukee (27-26-1, 15-10-1 Horizon), allowing six runs, four of which were earned, and seven hits in three plus innings of work. He walked five, hit one, and struck out just one.

The opener saw Valpo jump on top in the second inning.  After a walk to Hagel, Manning singled to center and the ball got by Doug Dekoning, allowing Hagel to come all the way around to score.

Milwaukee tied the game in the fourth on a single by Sivilotti before the Crusaders retook the lead in the fifth.  Gaedele launched his team-leading seventh home run of the season, a two-run shot that landed well beyond the left-center field wall, scoring Morman who had reached on an error.

A Tell Taylor RBI single in the fifth pulled Milwaukee within one and the Panthers tied the game in the sixth on a Crusader throwing error on a sacrifice bunt attempt.  A Sam Koenig sacrifice fly in the seventh put the hosts on top 4-3 heading into the ninth.

Valpo rallied with a lead-off single by Hagel followed by a double to the gap from Robinson, tying the game.  After a sacrifice bunt moved Robinson to third, a failed squeeze bunt resulted in a caught stealing at the plate, but allowed Corey Thibault  (Tustin, Calif./Foothill H.S.) to reach on the dropped third strike when the catcher tagged Robinson out instead. After a walk to Morman, Bain put Valpo on top with a single into left.

“This was the second straight game we battled back and tied it in the ninth,” Woodson said.  “Today we even took the lead, but we have to finish out ball games.”

Milwaukee tied the game with two outs in the bottom of the ninth as Dekoning walked on a 3-2 pitch and Sivilotti delivered a run-scoring double.  In the 10th, a two-out single by Cole Kraft plated the winning run from third.

Robinson and Bain each had two hits for Valpo as part of an eight-hit attack while Sivilottie went 4-for-5 with two RBIs for the Panthers.

Tyler Deetjen (Saint Charles, Ill./East H.S.) worked seven innings on the  mound but did not earn a decision, allowing four runs and nine  hits.  He did not walk a batter.  Milwaukee starter Eric Semmelhack also had a no decision after pitching seven innings. He allowed three runs, only one of which was earned, and five hits while fanning eight.  Greg Blohowiak earned the win (2-1) for the Panthers out of the bullpen with 1.1 innings of scoreless relief while Mike Jacobs (Beloit, Wis./Turner H.S.) suffered the loss (0-1) for the Crusaders.

Valparaiso (22-30, 14-10) will head to Dayton, Ohio on Wednesday to begin the Horizon League Tournament.  The Crusaders will open with Butler at 10 a.m. CDT at Nischwitz Stadium on the campus of Wright State University in the double elimination event.