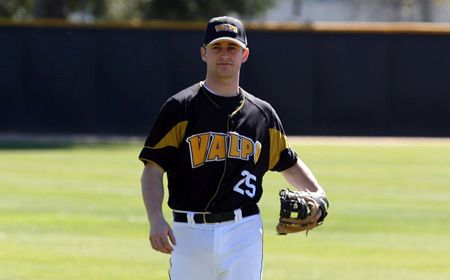 Valparaiso’s winning streak at the Horizon League Tournament came to an end on Saturday afternoon as the Crusaders fell 4-3 to Wright State at Nischwitz Stadium in Dayton, Ohio in the winner’s bracket final of the double elimination tournament.

“It was a really well played game all around,” head coach Tracy Woodson said afterwards.  “We had a couple of opportunities, but you have to give Wright State credit.  They made some good defensive plays on hard hit balls.”

The Crusaders battled back from a 3-0 deficit to tie the game, but the Raiders pushed the eventual winning run across the plate in the fifth.

The top-seeded and host Raiders plated three runs in the bottom of the second, taking advantage of two hit batsmen and a walk.  Justin Kopale had a RBI ground out and Sam Picchiotti delivered a two-run single, giving Wright State the 3-0 lead.

Valpo battled back, tying the game in the fifth.  Steven Scoby (Delton, Mich./Delton Kellogg H.S.) led off with a single and moved to third on a double by Michael Morman (Rockford, Ill./Boylan Catholic H.S.).  Andrew Bain (Indianapolis, Ind./Park Tudor H.S.) followed with a two-run single, pulling the Crusaders within a run.  With two outs, Robbie Robinson (Brea, Calif./Olinda H.S.) tied the game with a single to left-center, plating Bain.

Wright State (35-17) answered with another two out run in the fifth.  Dan Marsh led off with a double and scored on Corey Davis’ two-out single, with what proved to be the winning run.

“Jon had good stuff,” Woodson said.  “He had one rough inning, but bounced back and was great for the most part.  We had our chances to tie it with runners in scoring position.  I felt like we were that close.”

Jordan Marker earned the win (2-2) with 3.1 innings of scoreless relief, allowing just two hits.  He struck out three and walked one.

Morman went 3-for-4 for the Brown and Gold while Bain, Robinson, and Scoby all had two hits as part of Valpo’s 11-hit attack.  Davis, Kopale and Zach Tanner each had two hits for the Raiders.

“We need to bounce right back,” Woodson concluded.  “We deserve to be in that championship game tomorrow.”

Valparaiso (24-31) now has to bounce back on Saturday night to face Youngstown State (14-40) in an elimination game in the loser’s bracket final.  First pitch is slated for 6 p.m. CDT.