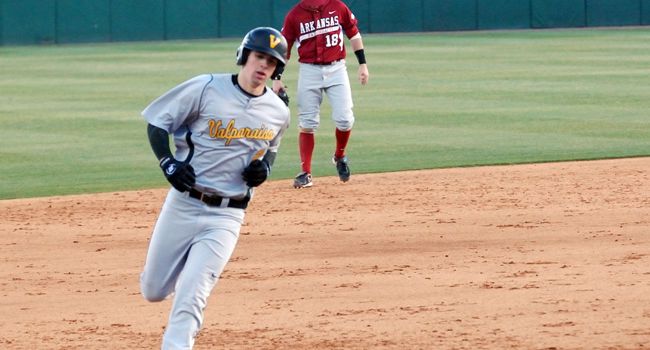 Valparaiso rallied from six runs down after four innings to close within two, but that is as close as the Crusaders would get on Monday evening, falling 8-6 to Winthrop at Winthrop Ballpark in Rock Hill, S.C.

The Crusaders trailed 8-2 before beginning their comeback attempt.  In the fifth, Kyle Schneider (Mishawaka, Ind./Penn H.S.) led off with a walk, moved to second on a groundout, and scored on a Chris Manning (Lake Forest, Calif./El Toro H.S.) single.

Valpo scored three more times in the seventh to cut the deficit to two, plating all of the runs with two outs.  Andrew Bain (Indianapolis, Ind./Park Tudor H.S.) singled and moved to second when Tanner Vavra (Menomonie, Wis./Menomonie H.S.) reached on an error.  Manning singled home Bain and moved into scoring position on the throw with Vavra taking third.  A wild pitch plated Vavra and Bain scored as Will Hagel (Arlington Heights, Ill./Prospect H.S.) singled.

The Brown and Gold loaded the bases in the eighth as the first three hitters reached on a walk and two errors, but three straight strikeouts ended the threat.  Valpo added a base runner in the ninth, but again could not tie the game.

Valpo struck first in the opening inning, as Bain singled and Vavra followed with a double.  Hagel delivered a sacrifice fly and gave the Crusaders an early 1-0 lead.

Winthrop (3-14) answered with a run in the bottom of the first and took the lead for good with five more tallies in the second, taking advantage of two Crusader errors.

Vavra hit a solo home run in the third for Valpo before Justin Hopper answered with a two-run blast in the fourth, giving the Eagles an 8-2 lead.

Each of the top four hitters in the Valpo lineup, Bain, Vavra, Manning, and Hagel, had two hits each as part of the Crusaders’ 11-hit effort.  Winthrop had six hitters with multi-hit games while Hopper drove home three runs.

Will Robinson (Placentia, Calif./Valencia H.S.) started and suffered the loss (1-2) for the Crusaders, working 1.2 innings while allowing five runs, four earned, and four hits.  Michael Gilroy picked up the win (1-2) for the Eagles, giving up two runs on five hits.  Preston Johnson pitched the final 2.1 innings for the save.