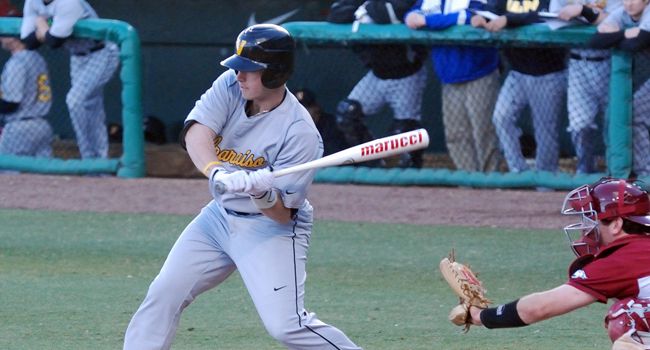 Belmont scored two runs in the seventh and added an insurance run in the eighth inning on Wednesday afternoon to rally and defeat Valparaiso 5-3 at Rose Park in Nashville, Tenn.

The Crusaders took the lead in the fourth as Chris Manning (Lake Forest, Calif./El Toro H.S.) singled, moved to second on a balk, and scored on a single to left by Billy Cribbs (Rochester, Mich./Rochester H.S.).

The host Bruins answered with a pair of runs as Zac Mitchell doubled down the right field line, plating a pair of runners.

Trailing 2-1, John Loeffler (Burnsville, Minn./Burnsville H.S.) put the Crusaders on top with one swing of the bat, homering to right, scoring Steven Scoby (Delton, Mich./Delton Kellogg H.S.) in the top of the seventh inning.

Valpo’s 3-2 lead only lasted until the bottom of the inning as Belmont (10-7) scored a pair of runs on a sacrifice fly and a single.  The Bruins added an insurance run in the eighth and the Crusaders were unable to push across any late runs.

Loeffler, Manning, and Andrew Bain (Indianapolis, Ind./Park Tudor H.S.) each had two hits for Valpo as part of an 11-hit attack while Scoby extended his hitting streak to 11 straight games.  Manning has reached base safely in all 16 games for the Crusaders while Cribbs has reached in all 15 games in which he has played.

“We swung the bats well today, but fundamentally we cost ourselves,” head coach Tracy Woodson said.  “A couple of missed cutoffs, a couple of walks, a hit batsman, and an error cost us four of the five runs.”

Belmont finished the game with 10 total hits against six Valpo hurlers.  Rob Rabakozi (Burbank, Ill./Reavis H.S.) suffered the loss (0-1) for the Crusaders, working the seventh inning.  Jessie Snodgrass picked up the win (1-0) in relief for the Bruins while Garrett Fanchier pitched a scoreless ninth to notch his fifth save of the season.

“The real season starts Friday,” Woodson added.  “We need to forget about what we have done so far and start fresh.  I feel good about where we are at as a team and we’re excited to start league play.”

Valparaiso (4-12) will return to Indiana on Friday afternoon, traveling to Indianapolis, to open Horizon League action.  The Crusaders will face Butler in a three-game series, with Friday’s opener commencing at 2 p.m. CDT at Bulldog Park.