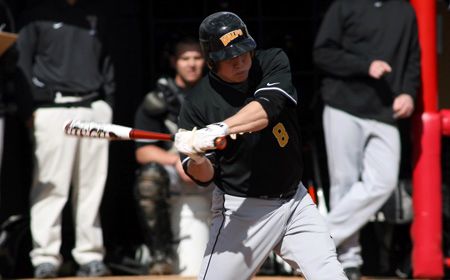 The redshirt junior roped a JB Kole fastball to the right-center gap as Andrew Bain trotted home to cap a comeback in a 7-6 Valpo win over Villanova (1-7).

It appeared glum for the Crusaders early on as freshman Dalton Lundeen experienced some first-inning jitters in his first career start. Lundeen issued a walk to the first batter of the game.  Villanova third-baseman B.J, Bochicchio laced triple to the left centerfield gap for an RBI triple.  Tyler Sciacca and John Cialone delivered back-to-back basehits to make it 2-0.

Lundeen got the first out of the game when the five-place hitter Steve Schrenk grounded into a fielder's choice that erased Sciacca from the basepaths.  The momentum quickly reversed when Brandon Clark smacked a basehit down the left field line that plated Cialone and Schrenk. Clark was thrown out trying to stretch the hit into a double.

Bain improved on his .318 average with an RBI single that scored Tanner Vavra from second base.

Lundeen swatted away the butterflies and threw up three consecutive scoreless innings.

Valpo got a run back in the bottom of the 4th when Bryce Hara hit a sac fly to center that brought in Elliott Martin.  Hara, who had been battling a flu bug that inflitrated some members of the club, had a 1-for-3 game with a run scored and an RBI.

Villanova got two runs right back in the top of the 5th inning.  Outfielder Paul Rambaud led off with a single before a wild pitch moved him up 90 feet.  Three batters later, Cialone scored him with a two-out basehit to left field.  Cialone advanced to second on the throw, and scored on the next at-bat when Schrenk recorded a single for a 6-2 lead.

The Crusaders returned serve with two runs in the bottom half.  Spencer Mahoney singled to center, Vavra drew a walk before a double steal moved them to second and third with no one out.  Bain had his second RBI hit of the day to Mahoney.  Designated hittter John Loeffler plated Vavra with a sac fly to center.  After five innings, Villanova led 6-4.

Chris Manning laced an RBI double to left-center field that made it a one-run game.  Hara came around from first on the gapper.

Villanova head coach Joe Godri handed the ball to JB Kole in the 9th inning with a 6-5 lead.  Kole demonstrated considerable trouble with his command, evidenced by a four-pitch walk to Vavra, the lead-off batter.  Bain was hit by a pitch the next at-bat.  Head coach Tracy Woodson called on Andy Burns to sacrfice bunt Vavra and Bain over.  Kole threw one strike before issuing a free pass to load the bases.

Martin bounced a ball up the middle that Sciacca, the shortstop, made a nice play on to save the game for the time being.  The RBI groundout brought in Vavra, the tying run.

With first base open, Michael Morman was given an intentional pass to load the bases with one out and create a force play at any base.

Woodson pinch-hit Kowalczyk for Jake Hanson who had taken over for Billy Cribbs in the top of the 9th inning. Kowalczyk watched two balls go by before taking a strike.  On the next delivery, Kowalczyk shot a ball deep into the right field gap for the game-winning hit.

Vavra reached base in four out of five plate appearances lifting his OBP to .447.  The senior had one hit and three runs scored as well.

"It was a heck of a comeback.  We saw a lot of good things from our freshmen today," Woodson said.

Valparaiso avoided its second three-game losing streak on the season as they improved to 3-7.  The Crusaders play their final game on the Port Charlotte swing of the Florida trip tomorrow morning against Toledo.  First pitch is scheduled for 10:30 am Eastern/9:30 am Central.  Freshman Trevor Haas will get the ball.