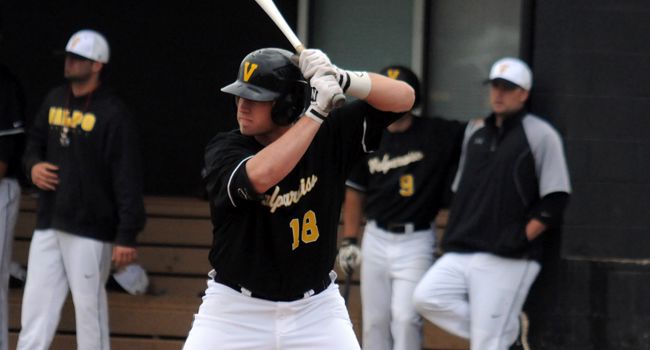 The sign may read Fairfield Inn, but the Crusaders have been regulars at the Heartbreak Hotel so far this spring trip.

The Crusaders dropped a 3-2 tilt against South Florida in a game which they led for the majority of. The deja vu has been nauseating for Valpo this spring as Friday night represented the team's fifth one-run loss.

The contest was a pitcher's duel from the get-go.

Senior Kyle Wormington one-upped his counterpart in the opening frame, dispatching the Bulls in 11 pitches.

The Crusaders drew first blood in the top of the 3rd inning.  Outfielder Chris Manning ripped a Herget delivery to left field to lead off the inning. A pickoff throw got away from Bulls first baseman Jimmy Falla that allowed Manning to advance to second.  Billy Cribbs then laid down a sac bunt moving the Crusader right fielder to third base.

Anticipating a low-scoring affair, USF head coach Lelo Prado moved the infield in with Manning on third and one out. Bryce Hara fouled off a variety of Herget deliveries before grounding out to second baseman Nik Alfonso.  Spencer Mahoney arrived to the plate with a two-out RBI opportunity, but before he had the chance to knock Manning in, a passed ball allowed the first run of the game to score.

The Crusaders received an insurance run in the top of the 4th inning when John Loeffler hit a towering shot to right field deep into the Tampa night.  The solo home run was his first of the season.

The Bulls got on the scoreboard in the bottom half of the 4th,  Wormington got the first two batters of the inning before allowing a basehit to designated hitter Chris Norton.  Outfielder Austin Lueck lined a pitch to right field that a sliding Manning lost in the lights.  The ball rolled all the way to the wall.  The play was originally ruled an error, but was later changed to a hit and error.  Nevertheless, the play allowed Norton to come around and make it a 2-1 Valpo lead.

Wormington and Herget exchanged zeroes in the middle innings.

The dagger to the chest came in the bottom of the 8th inning.  With one out, Kyle Teaf smacked a ball to left-center field that the speedy shortstop legged out for a triple.  With the infield in, Nick Mendez shot a ball up the middle to tie the game at 2-2.  James Ramsay stepped in and drove a ball to right field that one-hopped the wall.  Manning fired the ball into the cutoff man Mahoney, who then spun and threw on to Elliott Martin to catch Mendez who took a wide turn around third base.

With two men out and Ramsay in scoring position, cleanup hitter Falla recorded the game-winning basehit to center field.

Herget gave way to reliever Lawrence Pardo in the 8th.  The left-hander earned his first win of the season in the two-hour and four-minute affair.

Valpo made it interesting in the 9th inning when Loeffler drew a two-out walk.  Mark Johnson came on to pinch run for the designated hitter and made it to third base on an Elliott Martin single to right-center field.  With the tying and go-ahead run on the basepaths, outfielder Michael Morman grounded into a 6-4 fielder's choice to end the game.

Wormington (0-3) deserved better than a loss, executing one efficient inning after another, keeping USF hitters off balance with all three pitches.  The senior surrendered six hits and two earned runs while walking one and striking out two.  He finished the evening with 94 pitches in 7 2/3 innings.

Loeffler, who had entered Friday night's game with a .111 average, had a single and a walk to go along with his blast as part of a 2-for-3 game.