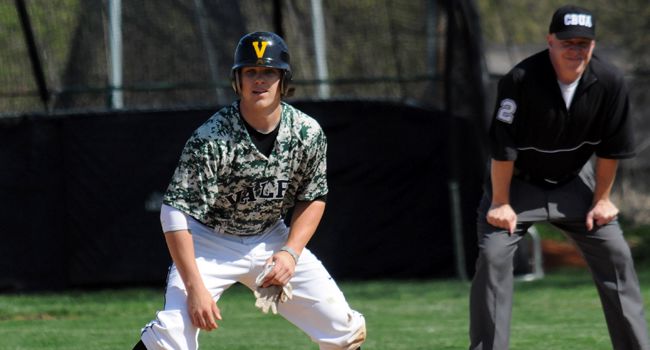 It was another duel between starting pitchers Saturday evening, but the Crusaders came out on the winning end 5-2 over South Florida in Tampa.

Nick Gonzalez entered Saturday night's game for USF with a reputation for control problems, evidenced by nine walks in 10 2/3 innings pitched. But the freshman showed no symptoms of command issues early on needing just 14 pitches to retire the first six Crusader batters.

Webb was just as economical as in his first three starts as the junior matched zeroes with Gonzalez in the first two frames.

South Florida registered a run in the 3rd inning when first baseman Jimmy Falla hit a line drive to center field that Chris Manning didn't pick up until the ball was nearly over his head,  The double allowed James Ramsay to score all the way from first to give USF a 1-0 lead.

The Crusaders got the run back in the following inning.  Tanner Vavra led off the 4th with a hot shot to Nik Alfonso that the Bulls second baseman was unable to corral.  Vavra subsequently stole second and third base off Gonzalez drawing a throw neither time.  After a walk to John Loeffler, left fielder Andrew Bain ripped a line drive right back at Gonzalez, that the pitcher got a glove on in self defense but could not make a play.  The infield hit tied the game 1-1.  An Elliott Martin strikeout and a Michael Morman groundout prevented Valpo from doing any further damage in the inning.

Vavra was the linchpin for the Crusaders again in the top of the 6th inning.  A leadoff infield single and his third stolen base of the evening found Vavra on second base with no one out.  Karch Kowalczyk grounded out to the right side of the infield to move the Crusader second baseman to third base with one out.

It appeared at first that the Bulls were going to pitch around Loeffler with first base open, but after Gonzalez worked to a full count, the Valpo first baseman tapped a two-hopper to first base.  Falla charged and fired home and though the throw beat the runner, Vavra shimmied his way around the tag from catcher Chris Norton.  Valpo took a 2-1 lead midway through the sixth on Loeffler's fourth RBI of the season.

Gonzalez's night was over after the 6th inning.  The lefty allowed two runs - one earned - while striking out four and walking one.  The USF pen imploded on contact, allowing basehits to Morman and Manning.

Prado poked the bear in the 7th inning by issuing an intentional pass to Mahoney to load the bases for Vavra who was 2-for-3 on the game at that point.

The curious move paid off initially when Vavra grounded into a fielder's choice that drew a force out at home but kept the bases loaded.

Kowalczyk, who supplied the game-winning RBI Tuesday afternoon against Villanova, doubled down the third-base line on a Jordan Strittmatter fastball.  The two out hit emptied the bases and gave Valpo a significant four run cushion 5-1.

Webb went right back out for the 7th and put up another zero.  He started the 8th inning but was pulled in favor of Ben Mahar after the starter hit the designated hitter Alex Mendez with the first pitch of the inning and then threw issued a free pass to Ramsay.  Mahar quickly garnered two groundballs, allowing only an unearned run to cross the plate.

Head coach Tracy Woodson stuck with Mahar in the 9th in favor of Kowalczyk despite the save situation.  The right-hander rewarded the skipper with a scoreless 9th inning.

Webb's (2-2) final line was seven-plus innings, five hits, two runs (one earned), four walks and three punchouts.  The casualty of anemic run support in both of his losses could watch on with ease as Mahar recorded the final six outs of the game.

The rubber game of the series will be tomorrow afternoon at 1:00 Eastern/12:00 Central.  Chris DeBoo (0-3, 5.68) looks for his first win.  USF was still undecided on a starting pitcher at the conclusion of Saturday night's game.