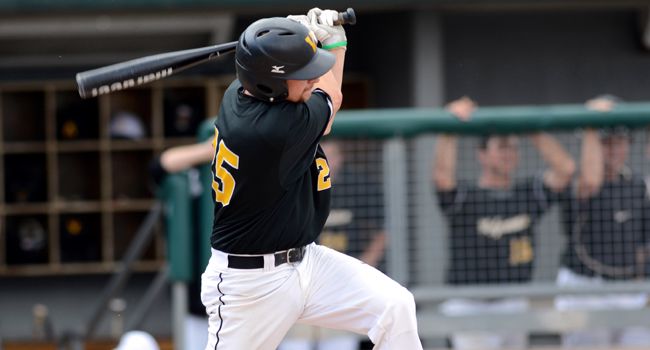 Wednesday was a banner day for the Crusader offense and freshman pitchers.  Trevor Haas (1-0) threw 5 1/3 innings Wednesday night for his first collegiate win behind nine runs from the Valpo bats.  The 9-2 win over Yale University was the first victory over the Ivy League club in school history.

Just as in the first game of the day-night doubleheader, the Crusaders batted around for five runs.  Catcher Billy Cribbs led off the hit parade in the 3rd inning with a basehit to left-center fieid.  With the score still at 0-0, Bryce Hara was called on to sacrifice Cribbs up to second base. After the successful bunt, Valpo rattled off five consecutive singles and an infield ground out en route to its second five-run frame of the day.

The Crusaders tacked on another run in the top of the 4th inning to make it 6-0 when a Spencer Mahoney fielder's choice plated Cribbs for his second run scored of the evening.

Haas was especially efficient in his first four innings, expending just 49 pitches and allowing only one runner past first base.

The Bulldogs put on a mark under the run column in the home half of the 5th.  Catcher Chris Piwinski hit a sacrifice fly that brought home right fielder Eric Hsieh.

Yale (1-4) made it 6-2 the following inning when David Toups singled to right to score leadoff batter Nate Adams.

Senior Mike Jacobs relieved Haas with one out in 6th inning.  The southpaw struck out the first batter he faced on the front end of a strike 'em out-throw 'em out inning-ending double play.

A Bulldog staff bereft of reliable arms beckoned infielder Green Campbell to pitch the 7th and 8th innings.  The sophomore fared the best of all Yale pitchers Wednesday night throwing two hitless frames, his only blemish a walk to designated hitter Andrew Bain.

Jacobs worked a perfect 7th and 8th inning before being rewarded the final inning.  A scoreless 9th inning qualified the senior captain for the save, the first of his career.

The offensive outpouring of nine runs was a season-high for Valpo.

Valpo (6-10) is back in action Thursday afternoon at 2:00 pm Eastern/1:00 pm Central against the Bucknell Bison.