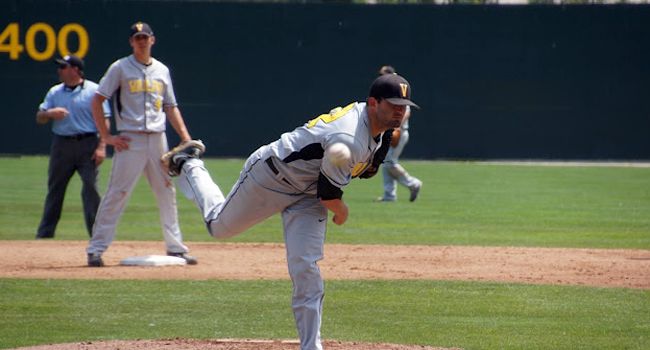 The backbone of the Crusaders bended Friday as the pitching staff allowed seven runs and twelve hits in Valpo's Horizon League opener against Wright State in a 7-2 loss.

Senior Kyle Wormington (1-4) showed no signs of trouble through his first two innings before the Raiders brought ten batters to the plate in a clamorous 3rd inning.  The offensive barrage featured six hits, a hit batter, a sac fly and five runs before it was all over.  Wormington was pulled after 2 1/3 innings, his shortest conference start as a member of the Crusaders.

Raider starting pitcher Casey Henn (3-3) retired 15 of 16 Valpo batters between the second and sixth innings en route to his third win of the season.  The senior surrendered two runs on seven hits over 7 1/3 innings pitched.

Valpo put a run on the board in the second inning when Bryce Hara scored on a Mark Johnson sacrifice fly to left field.  Hara reached via a bunt.  The play was originally scored a basehit before changed to an error immediately after the game.  Chris Manning bunted Hara over to second.  A wild pitch advanced him to third base before the fly ball plated him.

Shortstop Justin Kopale singled up the middle to lead off the bottom of the 3rd inning.  A John Brodner sacrifice bunt preceded six consecutive Raiders reaching base, including a two-run triple off the bat of catcher Garrett Gray.

Dalton Lundeen was called on to relieve Wormington with the bases loaded and one out in the 3rd.  The lefthander allowed a Beau Phillips sac fly before getting Valpo out of the jam.

Wright State scored two unearned runs in the bottom of the 5th inning via a Kopale sac fly and a Brodner infield single.

After a lackluster four innings, the Crusaders showed signs of life in the visitor's half of the 7th when Manning laced a liner back up the middle past Henn to score Elliott Martin.  However, Henn quickly got Mark Johnson on strikes and Billy Cribbs to fly out to center to end the inning.

Southpaw Cody Kopilchack chucked 1 2/3 shutout innings out of bullpen for Wright State in the 7-2 Raider victory.