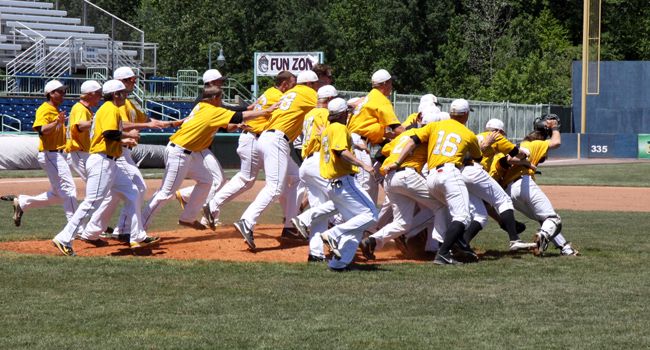 On a day where a veteran-laden lineup clinched its second straight NCAA Tournament berth, it was a freshman that stole the spotlight.

Dalton Lundeen turned in one of the best starts of the year as the lefty sent one Wright State Raider after another to the dugout in frustration. Lundeen (5-1) allowed two hits over eight shutout innings before giving way to the Horizon League Relief Pitcher of the Year to nail down a 3-0 Horizon League Championship Game victory for Valpo at Eastwood Field in Niles, Ohio.

The Crusaders jumped on Wright State starter Casey Henn early, doing all their damage with two outs. Tanner Vavra reached with a single up the middle before John Loeffler was plunked in the leg. Chris Manning finished off a nine-pitch at-bat with a double to the right center gap that brought in Vavra and Loeffler. Shortstop Spencer Mahoney wasted no time extending the Valpo lead to 3-0 as he snuck an RBI triple inside the first base bag and down the right field line.

"I liked how we got out to a lead for the third consecutive game. I think it took pressure off our pitchers this weekend," head coach Tracy Woodson said.

Facing a lineup of all right-handed batters, Lundeen didn't allow a hit until the fifth inning when Cody Gardner deposited a two-out single into left field. Gardner had both Raider hits on the afternoon.

Lundeen faced 27 batters and recorded 20 first-pitch strikes and 64 of his 91 pitches were for strikes. He punched out six and did not issue a walk. Wright State never had a runner past second base.

"Dalton was spectacular. I hope that is a sign for things to come in the future," Woodson said.

Henn (4-8) settled in after the turbulent first inning and retired 14 straight Crusaders at one point. Battling a back injury, the senior gutted out 5 2/3 innings pitched. He surrendered three runs on four hits, walking one and striking out four.

Karch Kowalczyk was named Horizon League Conference Tournament MVP but not before working a perfect ninth inning to notch his 12th save of the season. Kowalczyk got Garrett Gray swinging on an 0-2 slider that sent the Valpo bench onto the field and into a dogpile.

"Karch was Karch," Woodson said with a grin.

Lundeen, Kowalczyk, Manning, Mahoney and Andrew Bain were all named to the Horizon League All-Tournament Team.

Kowalczyk collected a save in each Valpo win of the Tournament as his ERA shrunk to 0.35.

The Crusaders (31-26) recorded runs in just six innings of the Horizon League Tournament, but they scored at least three runs in four of those frames.

Valpo will learn its destination for the NCAA Regionals Monday morning at 11:00am CT.