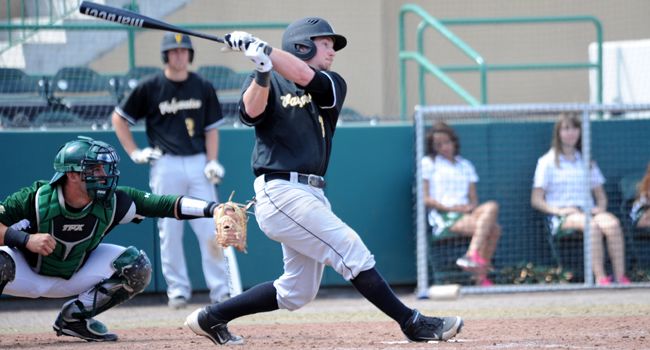 Ellis Foreman (Round Rock, Texas/Stony Point) proved Wednesday night that he was well worth the wait.

The redshirt freshman missed the entire 2013 season as he recovered from Tommy John surgery, but the Crusader coaching staff had seen enough prior to the right-hander's elbow injury to know he could serve as a pivotal piece in Valpo's long-term plans.

The Texan sat between 87-89 the entire game while hitting 91 on the gun in seven solid innings. He surrendered just one earned run on four hits. Foreman walked three but struck out five.

"Ellis was filthy tonight. He set the tone. He was aggressive from the start and I think the team played off that. We got great at-bats off the bench. This was our best team win of the year," head coach Brian Schmack said.

The Crusaders played comeback for the first time this season. Texas State pushed two across in its half of the third when the Bobcats took advantage of a throwing error at third base and a wild pitch.

Valpo trailed 2-0 before it recorded its first hit.

Karch Kowalzcyk (Peru, Ill./La Salle-Peru), the Crusader DH, singled to lead off the 4th for Valpo before moving up to second base on a wild pitch. Michael Morman (Rockford, Ill./Boylan Catholic) reached on a hot shot to short that also advanced Kowalzcyk to third.

With Andy Burns (Edwardsville, Ill./Edwardsville [Heartland CC]) at the plate, Chad Young wielded his second wild pitch towards home, which allowed Kowalczyk to scamper home. The miscue cut the Bobcats lead in half. The Crusaders were unable to add any more in the inning as they trailed 2-1 after three and a half innings.

Valpo evened things up in its half of the 7th when pinch-hitter Emerson Misch (Bloomfield Hills, Mich./Andover [IMG Academy]) shot a single to right that scored Morman.

Foreman fired off a 1-2-3 bottom of the seventh in response.

The Bobcats were unable to capitalize off a two-out Crusader error in the 8th as Tyler Pearson grounded out to third.

Valpo claimed its first lead of the evening in the top of the 10th after Morman led off the frame with an infield single. After Misch sacrificed the left fielder into scoring position, Burns delivered the knockout blow with a double down the left field line.

Kowalczyk traded the hammer for the arm in the bottom half of the inning as the senior threw a perfect frame for his fourth save of the year, striking out two in the process.

With the win, Valpo (5-6) moves onto a three-game set with Texas A&M-Corpus Christi in southern Texas beginning Friday. Cole Webb (2-1, 3.86) will square off against RHP Matt Danton in the series opener. Links to the live stats will be available at valpoathletics.com.